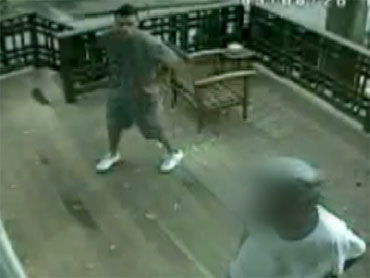 During the holidays, our homes are filled with expensive gifts, making them prime targets for thieves. "Early Show" consumer correspondent Susan Koeppen shared some tips on how to keep your home safe -- at holiday time, and the rest of the year.

Koeppen said a home is burglarized every 15 seconds in the U.S. However, with just a little effort and money, you can do a lot to protect yourself and your property.

One way to protect yourself when you're not around is to install a home security camera. A surveillance starter kit, which includes one camera, costs $299.

A surveillance camera is how Xiomara Grant discovered a neighbor was stealing packages right off her front step.

Evan Tree, a security expert at Logitech, told Koeppen most burglars go right up the front steps and through the front door in most break-ins.

He added most people haven't taken the time to really think through their security.

An expert set up three cameras for "The Early Show" in just 20 minutes.

Tree said installing surveillance cameras is as easy as loading software on a computer and plugging in the camera.

The cameras have motion sensors that send an alert to your mobile device when triggered.

Along with cameras, Koeppen said, it's a good idea to keep trees and bushes in your yard to a minimum to help ward off criminals.

Replacing outdoor lights with motion sensor lights, Koeppen added, can serve as a deterrent for a modest cost.

Tree said, "Anyone moving in the back yard will trigger that flood light, and as we know, crooks do not like light."

Also, even placing security system stickers in the window can help fake out potential intruders, according to Tree.

Tree said, "You let them know, 'Hey, I care about my security, move on, I don't want you in my neighborhood.'"

Koeppen added on "The Early Show" there are other free ways to make your home more secure:

• Don't put your name on your mailbox because potential thieves can call information with your address and call your house. If you don't answer the phone, it's likely you aren't home and it will be easier to break in.

• Leave a television or radio on in your house to make people think someone is inside.

• If you're worried about packages being delivered to your house, have a conversation with the person who delivers your packages and just say, "You know what, don't leave them on the front porch. I'm worried about them there. I have a secret spot in the back where i want you to tuck them away."