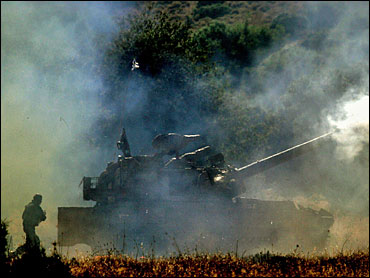 This column was written by Sarah Posner.

In the June issue of the Prospect, I wrote about Texas televangelist John Hagee, an Armageddon prophesier who insists that military confrontation with Iran is foretold in the Bible as a necessary precondition for the Second Coming.

Using his best-selling book, "Jerusalem Countdown," his internationally broadcast television program, and the viral marketing offered by a network of mega-churches whose pastors have signed on to his new lobbying effort, Christians United for Israel (CUFI), Hagee has spent the past six months mobilizing popular support for a war with Iran. Based on his end-times prophecy, a supposed love of the Jewish people and the state of Israel and false claims that Iran is just months away from a viable nuclear weapon, Hagee maintains that confrontation with Iran is necessary to fulfill God's plan for the future of the world.

While it hardly seems like a sound basis for foreign policy, as the violence between Israel and Hezbollah escalates at the Israel-Lebanon border and beyond, Hagee's view of Iran's central role in a world-altering showdown seems to be catching on. And not just on the wingnut airwaves or among war-mongering chattering heads. It's gaining momentum among certain Republican presidential aspirants, who, like all Republican presidential aspirants, count beans and feel compelled to bow to the will of American religious extremists to win.

The Jerusalem Post reported this week that remarks by Newt Gingrich and John McCain that the Israel-Lebanon violence marks the beginning of World War III have their roots in Hagee's book. Knesset member Benny Elon told the Post that Gingrich and McCain "said this because they think it will lead to Iran getting involved, which they believe will set off World War III,'" adding that their "comments originated with American evangelist John Hagee." As Hagee and his minions from CUFI descend on Washington this week to lobby Congress, armed with Hagee talking points claiming that Iran will have a nuclear weapon in six months, could it be a coincidence?

Gingrich first called the escalating conflict "World War III" on the Sunday talk shows, and followed up with a column in which he argued that the phrase "global war on terror" is insufficient to capture the epic nature of the conflict that "pits civilization and the rule of law against the dictatorships of Iran and Syria and the terrorist groups of Hezbollah and Hamas that they support." When asked about Gingrich's "World War III" comments on "Larry King Live" Sunday night, McCain singled out Iran as the provocateur in the conflict, adding that "I think it's very clear that Iran is becoming more and more belligerent and needs to be reigned in."

Adding to the chorus was Bill Kristol, who wrote this week in his Weekly Standard that the "right response" for United States is "standing with Israel," the same phrase used as the title of a recent book by David Brog, former chief of staff to Arlen Specter and current executive director of CUFI. Kristol then issues the same dire threat to Iran that Hagee did (minus Hagee's fiery Armageddon imagery, according to which Kristol, as a Jew, would be converted to Christianity or condemned to die in a lake of brimstone). "For that matter," Kristol muses with the same dim lack of foresight that more than three years ago characterized his optimistic prescription for Iraq, "we might consider countering this act of Iranian aggression with a military strike against Iranian nuclear facilities. Why wait?"

Preachers like Hagee seem easy to ignore because we think their audiences, while vast, consists of rank-and-file religious extremists who have no real sway over American policy-makers. But Benny Elon's statement shows that Hagee does have such influence. Gingrich and McCain may or may not believe the Second Coming is imminent, but they do know that a GOP primary presidential campaign is coming soon enough — and they know where the votes are.

Sarah Posner is a freelance writer and contributor to The Gadflyer.