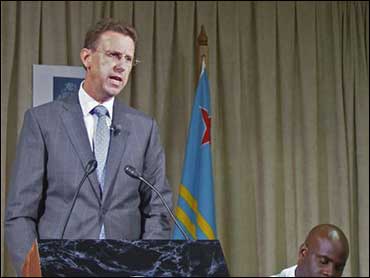 One of three top suspects in the disappearance of Natalee Holloway wrote during an Internet chat session that the teenager was dead, Aruba's chief prosecutor said Thursday.

Prosecutor Hans Mos refused to identify the person who wrote the message but said its discovery had contributed to the decision to re-arrest Joran van der Sloot and brothers Deepak and Satish Kalpoe last month.

The men were subsequently released after they refused to speak to authorities about newly uncovered evidence. The Aruba Public Prosecutor's Office said Tuesday it will not charge the three.

Mos said their re-arrests had been warranted by the circumstantial evidence, including statements from witnesses who said the three behaved strangely in the hours after Holloway vanished at age 18 on May 30, 2005 during an Aruba vacation with her Alabama high school graduating class.

Mos refused to reveal details of other evidence that he said was gathered through new investigative techniques and a listening device planted in one of the suspects' homes. Mos said van der Sloot and the Kalpoe brothers remain "the primary three persons of interest."

"Any and all leads and new evidence will be investigated," Mos told reporters.

But Ronald Wix, an attorney for the Kalpoe brothers, denied that prosecutors had new evidence.

"All they did was recycle old evidence and claim it was new evidence," Wix told The Associated Press, adding that his clients felt vindicated by the prosecutor's decision to drop the case.

"Unless he finds a body in the bathroom of one of these kids, there's no way in hell they can arrest them anymore." Wix said.

The three men were seen leaving a bar with Holloway hours before she was due to board a flight home to Mountain Brook, Ala. Van der Sloot, who now attends college in the Netherlands, said he left Holloway alone on a beach that night. He and the Kalpoe brothers have denied any wrongdoing.

The Aruban prosecutors say they cannot prove a crime was committed because her body was never recovered. They have said they focused on cell phone calls and text messages between the suspects.

On Wednesday, Holloway's family blamed mistakes by Aruban investigators for bringing the case to a dead end after more than two years of searching.

Holloway's stepfather, Jug Twitty, said he believes witnesses in the Dutch Caribbean island know what happened but are not coming forward, and he criticized prosecutors' decision to dismiss the case against the only known suspects.

"It's also I think a sad day for the Aruban people because the officials there are inept," Twitty told The Associated Press in a telephone interview from Birmingham, Ala. Natalee's mother, Beth Twitty, referred a reporter's questions about the handling of the case to Jug Twitty.

Jug Twitty said Holloway's mother was considering appealing the prosecutor's decision and hoped a new search by a Texas-based private group in the waters off Aruba might find Holloway's body.

He said police botched the investigation from the start by waiting nine days to arrest the three suspects, giving them "plenty of time to cover their tracks."

"There are also people I believe that know what happened but won't say anything because they have to live on that island," he said.

Complaints the last two years about the handling of the investigation prompted calls for a tourism boycott by officials in the United States, including Alabama Gov. Bob Riley.

"We'll be glad when it's out of the media ... We've suffered enough," said John Herbert, a receptionist at the Arubiana Inn on the island of white sand beaches off the coast of Venezuela.