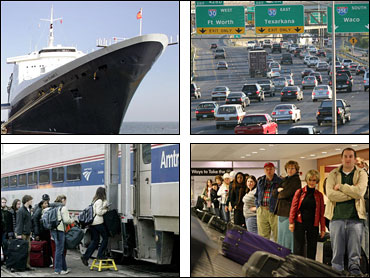 If you haven't booked your holiday travel yet, you may be in for a rude awakening.

Thanksgiving week airfare, for instance, is up about ten percent from last year, Peter Greenberg offered suggestions Friday to help you soften the potential blows to your pocketbook, pointing to deals and discounts to check out. One key, he stresses, is acting fast. The old conventional wisdom that waiting for last-minute sales works is out the window this year:

Reduced capacity and a slightly better economy have led to increased airfares, overall.

Last year, the airlines cut prices to attract travelers during the recession, but with fewer seats available this year, carriers are making sure availability doesn't exceed demand.

The bottom line here is that travelers could end up paying as much as $170 more on an average ticket if they travel on peak dates, i.e. the Tuesday before Thanksgiving and returning on Sunday, according to USA Today.

To make matters worse, peak travel surcharges have been implemented by many airlines, including those we think of as less expensive ones, such as JetBlue and AirTran.

Farecompare.com has a handy chart that shows the $10-$30 charges per day by American, Continental, Delta, United, and US Airways:

So, waiting until the last minute to buy isn't going to work this year. Of course, we've been trained for more than three decades by the airline business to be last-minute bookers to earn the best discount. The problem is that, with decreased capacity and more people flying, the law of supply and demand kicks in, and waiting to the last minute only means you'll be paying much, much more.

A lot of airlines we have all come to count on for discount travel (such as JetBlue or AirTran) are also hiking fares this season. In some cases, the Wall Street Journal points out, their prices are actually higher than those of the bigger airlines.

But there is some good news if you CAN plan ahead:

There's actually an air fare sale going on RIGHT NOW, but it expires in three days. Most deals must be booked soon, and Thanksgiving blackout dates apply. But for those flexible enough to travel outside of peak holiday dates, the savings are there:

American Airlines is offering travel from $49 each way. Book by Sept. 27, for travel through Dec. 14, excluding November 19-20, 23-30. Travel must be round-trip and take place Tuesdays, Wednesdays or Saturdays. Taxes and fees not included.

As an added incentive, if a lower fare is found for the exact same flight and itinerary for at least $5 less on another site (for the same day of purchase), American Airlines will refund the difference and give a $50 promotion code for use toward a future flight.

Sample fares include (all prices are one way):

Purchase tickets by Sept. 27 for travel through Dec. 15. Blackout dates are Nov. 24-27. All fares are one-way. Travel can take place any day of the week, but higher fares may apply for Friday and Saturday.

My additional advice: Think of alternate routes (instead of non-stops, try one-stop flights. Those are often cheaper).

Also, consider alternate cities to your destination of choice (instead of Boston, fly to Providence, instead of San Francisco try Oakland. My personal favorite? Try Islip (on Long Island) instead of LaGuardia or JFK).

For details on holiday fare sales to Europe and Bermuda, and on holiday hotel, cruise, train and bus deals, go to Page 2.

Thanksgiving is also a great time to go to Europe!

Aer Lingus' latest promotion offering discounted flights to cities such as Paris, Barcelona, London, Rome, and others, from $398 round-trip. Aer Lingus' prices are similar to those offered by American, Continental, and United.

The travel window is lengthy: Nov. 1 to March 2011, but the sale has no expiration date, so it could disappear at any moment.

The flights are only available from JFK in New York, Boston, Chicago and Orlando. Flights to Dublin and Shannon must be booked by Sept. 29. All other destinations require 30-day advance purchase. Rates are one-way based on round-trip purchase. Taxes/fees additional.

Fares are one-way based on round-trip purchase and do not include taxes and fees.

Travel from New York-Kennedy to select cities in Europe starting at $638 round-trip.

Fares are valid in the Economy (Coach) cabin on Delta, certain SkyTeam partners, and certain codeshare partner flights only. Fares shown are valid Sunday through Thursday, while higher fares apply for travel Friday through Saturday.

The Lodges at Deer Valley

Package includes kids ski free, 25 percent off ski rentals, and up to two complimentary lift tickets for children 12 and under with the purchase of two adult lift tickets. This package is available during the dead weeks of travel: Dec. 4 - 17; Jan. 3 - 13. Also available Jan. 19 - Feb. 9; and March 27 - April 10.

Get all your holiday shopping done while enjoying the Miami sun. The Sun, Shop and Spa package features 20 percent off regular rates, from $199 a night. The deal applies to two-night stays Oct. 1 - Dec. 26, based on availability. That includes discounts at Bloomingdales including a 15 percent savings pass; a free shuttle to Bloomingdales and the Aventura Mall; discounts to Trump International's boutique shops; a free foot reflexology treatment; daily breakfast; and a Bloomingdale's tote bag with snacks and water. 1-888-392-7924

Through Nov. 20, buy two nights and get one night free. Advertised fall rates for a studio (enough room for a family of four) start from $129. However, rates are dependent on what rooms are available: An online search revealed Thanksgiving rates averaging $311 a night. The prices dropped for stays mid-week in early December and midweek just before New Years. 866-912-3224

Fall travelers and football fans can get discounts between Oct. 1 and Nov. 30. Rates are from $299 a night in October and $279 in November. The Third and Long package includes accommodations at one of five Apple Core properties in New York City, plus a round of beer at one of four bars. (800) 567-7720

If you can get there, you can save on accommodations.

This fall and winter, get every third night free with the Compliments of Bermuda program. This package is available at 15 participating hotels when booking a minimum three-night stay. Available for booking Sept. 15 - March 12, for travel Nov. 15 - March 15. Participating hotels include the Fairmont Hamilton Princess, Grotto Bay Beach & Tennis Club, St. George's Club and more. Rates run from about $125-$460 a night, based on availability.

A month-long UK hotel deal involves 20 percent savings at 12 Radisson Edwardian hotels in London and Manchester. Book by Oct. 17 for travel between Dec. 19, 2010 and Jan. 9, and celebrate Christmas and New Year's abroad. Hotels are also offering 25 percent off dining at their restaurants. Rates exclude public holidays and New Year's Eve.

And perhaps as important, on shorter trips, the best, most economical alternative for holiday travel -- Bus and Trains.

On routes that are 400 miles or less, the bus can make a lot of economical sense. Rates are consistent even around peak dates, but be sure to book early and arrive early as they can fill up fast. Sample rates on popular routes: