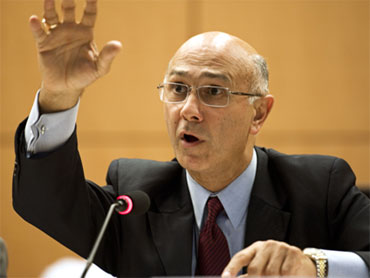 Engineering experts probing the Gulf of Mexico oil spill exposed holes Sunday in BP's internal investigation as the company was questioned for the first time in public about its findings.

BP's lead investigator acknowledged that the company's probe had limitations.

Mark Bly, head of safety and operations for BP PLC, told a National Academy of Engineering committee that a lack of physical evidence and interviews with employees from other companies limited BP's study. The internal team only looked at the immediate cause of the April disaster, which killed 11 workers and unleashed 206 million gallons (780 million liters) of oil into the Gulf.

"It is clear that you could go further into the analysis," said Bly, who said the investigation was geared to discovering things that BP could address in the short term. "This does not represent a complete penetration into potentially deeper issues."

For example, the National Academy of Engineering panel noted that the study avoided organizational flaws that could have contributed to the blast. BP has focused much of its work on decisions made on the rig, not with the managers on shore.

Najmedin Meshkati, a professor at the Viterbi School of Engineering at the University of Southern California, said he wondered why BP named its report an accident investigation when it left critical elements out. He asked BP to turn over information on shift duration and worker fatigue.

"How could you call this great work accident investigation ... and not addressing human performance issues and organizational issues and decision-making issues?" Meshkati asked.

He referred specifically to the confusion that occurred leading up to the explosion, when many workers aboard the rig were busy with work associated with finishing up a well. This distraction could have led to missed signs that something was wrong.

"It wasn't intended to be anything that it isn't," Bly responded. "It was a good contribution and a good foundation for further work for BP itself and others."

Other experts questioned one of BP's central conclusions that the oil and gas traveled up the center pipe, rather than the space outside the pipe. One wanted to know whether a device designed to shut off an engine when its starts to rev - as it would in the presence of gas - failed. BP said it didn't know if the device worked or not.

BP's testimony, and the questioning, lasted more than three hours on Sunday. It was the first time BP's six-person investigation team was questioned publicly about its findings.

On Monday and Tuesday in Washington, investigators will turn their attention to the government's response to the spill and its impact on the economy and environment at a hearing of the national spill commission set up by President Barack Obama.

BP's study found eight separate failures led to the oil rig accident. The report blamed BP and other companies, including Transocean, the rig's owner, and Halliburton Co., which was hired to do the cement work.

But the conclusions were made without examining the drilling rig, which remains on the sea floor, or the blowout preventer, a key safety device that was brought to shore only recently. Instead, the company relied extensively on real-time data collected aboard the rig to reconstruct what happened. BP also did not have access to samples of the cement used to seal the well, and said Halliburton refused to supply a similar mix for testing. BP has said the cement failed.

Halliburton officials criticized the methodology that BP used to draw its conclusions and claim that the well's design played no role in the incident.

Thomas Roth, a Halliburton vice president, took aim at testing by a company hired by BP that found Halliburton's cement, which was injected with nitrogen to form a foam, was unstable.

When asked why Halliburton continued to work on the well despite some of these red flags, Roth said, "We didn't see it to be an unsafe operation as it was being executed."

The National Academy of Engineering was asked by the Interior Department to look into the causes of the disaster and identify ways to prevent similar accidents. A report with the committee's preliminary findings will be published no later than Oct. 31.