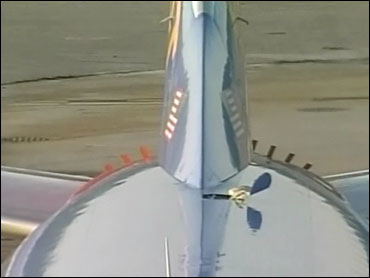 Federal safety officials are investigating how a foot-long hole opened in the top of a Southwest Airlines jet, forcing the aircraft to make an emergency landing in Charleston, W. Va.

The Boeing 737 jet lost pressure in the cabin, but no one was injured on Monday's Nashville-to-Baltimore flight that carried 126 passengers and five crew members.

The plane was built in 1994, and government records indicated that an inspection in January turned up eight cracks in the frame that required repairs.

Southwest said Tuesday that it inspected all 181 of its identical Boeing 737-300-series jets overnight before putting them back in the sky.

Just last year, Southwest found cracks in a half dozen of its 737s and was fined $7.5 million for overdue inspections, reports CBS News correspondent Nancy Cordes.

Passenger Michael Cunningham told NBC's "Today" show Tuesday that he had dozed off in his seat in mid-cabin when he was awakened by "the loudest roar I'd ever heard," and saw the hole above his seat.

Cunningham said people stayed calm and put on oxygen masks that dropped from the ceiling.

"After we landed in Charleston, the pilot came out and looked up through the hole, and everybody applauded, shook his hand, a couple of people gave him hugs," he said.

Passengers in the front rows didn't know the full extent of the hole — that it went right through to the sky, said Charles Overby, CEO of the Freedom Forum, a free-press foundation that runs the Newseum in Washington.

"I was just as happy not to know that," he told The Associated Press. "It was pretty harrowing, but I've been through worse landings during turbulence."

Southwest said it was unclear what caused the hole, which ripped open just in front of the vertical tail fin as the plane cruised at 30,000 feet. The jet flew on for nearly half an hour to Charleston.

Federal Aviation Administration records show that during the plane's 14-year checkup in January, eight cracks were found in the fuselage frame and repaired.

Damage from wear and tear is not unusual in planes of that age, and the FAA requires special inspections for cracks.

FAA spokesman Lynn Lunsford said an initial review indicated that inspection orders for the Boeing 737-300 didn't include inspecting the area of the body where the tear appeared on Monday's flight.

The FAA and the National Transportation Safety Board sent investigators to the scene to interview the crew and examine maintenance and inspection records, but could take months to find a cause, said agency spokesman Keith Holloway.

Southwest operated a normal schedule of flights — about 3,300 per day — with no cancelations or delays through midday, McInnis said.

Experts said the tear could have been caused by damage from a dent or ding, or the plane's skin could have suffered from age-related fatigue. Jet cabins are pressurized and depressurized with every flight, which can cause tiny cracks over time. The Southwest jet was built in 1994.

Bill Voss, president of the Flight Safety Foundation in Alexandria, Va., said a finding of fatigue would be more frightening. If that were the cause, it could force the FAA to consider more rigorous inspections for older aircraft, he said.

Alten "Skip" Grandt, an aeronautics professor at Purdue University who specializes in structural analysis, said that the fuselage of the Boeing jet performed as designed by preventing a sudden and catastrophic loss of pressure, and stopping the hole from expanding.

The cabin depressurized, he said, "but whatever caused that hole, it didn't cause the whole airplane to blow up."

In 1988, cracks caused part of the roof of an Aloha Airlines Boeing 737 to peel open while the jet flew from Hilo to Honolulu. A flight attendant was blown out of the plane and plunged to her death, and dozens of passengers were injured. The incident led to tougher rules for inspecting fuselages.

In March, Southwest agreed to pay a $7.5 million civil penalty imposed by the Federal Aviation Administration for operating nearly 60,000 flights in 2007 on planes that had not undergone required inspections for cracks in the fuselage. About 1,450 flights took place after the FAA had notified Southwest of the missed inspections.