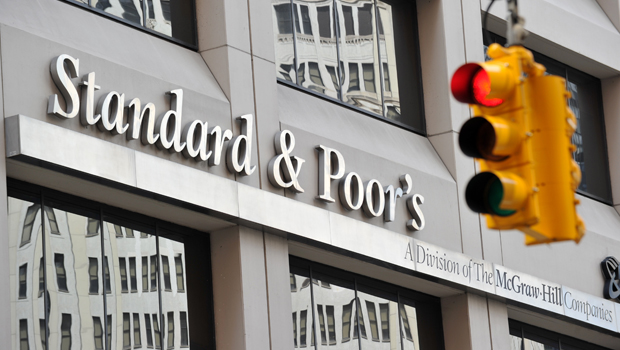 "S&P falsely claimed that its ratings were independent, objective, and not influenced by the company's relationship with the issuers who hired S&P to rate the securities in question," said Holder. "In reality, the ratings were affected by significant conflicts of interest, and S&P was driven by its desire to increase its profits and market share to favor the interests of issuers over investors."

The charges mark the first enforcement action the government has taken against any of the three major rating agencies involving the worst financial crisis since the Great Depression.

According to the lawsuit, S&P rated more than $2.8 trillion of residential mortgage-backed securities and about $1.2 trillion of collateralized-debt obligations between September 2004 and October 2007.

"To date, we have identified more than $5 billion in ... losses, resulting from CDOs that were rated by S&P between March and October 2007," the attorney general said. "During this period, nearly every single mortgage-backed CDO that was rated by S&P not only underperformed -- but failed."

S&P has won several previous lawsuits about these ratings by private investors. The firm won those cases by essentially saying its analysts were incompetent, not negligent. The company argued -- and the courts agreed -- that ratings are opinions and therefore protected by the right to free speech.

In an apparent effort to get around this defense the Justice Department is suing S&P under the Financial Institutions Reform Recovery and Enforcement Act, a 1989 law passed following the savings-and-loan crisis that imposes a relatively low burden of proof.

First Amendment layer Floyd Abrams, a partner at Cahill Gordon & Reindel LLP who is representing McGraw Hill Cos., the owner of S&P, said in an interview on Bloomberg Television that freedom of speech arguments have played no role in the current case, because it centers on allegations of fraud.

Several attorneys general were at the press conference with Holder. Sixteen states and the District of Columbia are also suing S&P.

In a statement issued Monday, S&P said the charges were utterly without merit and that it was being sued for not predicting the full extent of the housing bust, "despite [the] failure of virtually everyone to do so."

Many economists, investors and analysts did in fact warn of the impending meltdown, although at the time they did not get much attention from Wall Street, banking regulators or the media.

In today's announcement Holder argued that S&P knowingly ignored its own ratings standards for several years prior to the meltdown.

"As early as 2003, analysts within S&P raised concerns about the accuracy of the company's rating system, as well as the underlying methodology," Holder said. "S&P executives allegedly ignored these warnings, and -- between 2004 and 2007 -- concealed facts, made false representations to investors and financial institutions, and took other steps to manipulate ratings criteria and credit models to increase revenue and market share."

Even prior to this case government investigators have unearthed a wealth of evidence that could be used against S&P. In 2011 The Senate Permanent Subcommittee on Investigations published a report on the ratings agencies which included the following email exchange between S&P staffers about bonds which collapsed a little more than a year after being rated AAA:

Analyst Lois Cheng: "Um ... looks like the remaining portion is actually all sub-prime."

Analyst Lauren Sprinkle: "Do you want to address this with them, or let it go?"

Shares of McGraw-Hill Cos. (MHP), which owns S&P, were down 5.83 percent to $47.24 in midday trading. On Monday shares dropped nearly 14 percent the day before on the expectation that a lawsuit would be filed.

Questions at Tuesday's press conference centered on why only S&P is being sued. Moody's and Fitch also issued flawed ratings that were just as subject to conflicts of interest. Holder and his lieutenants would only discuss S&P.

Holder was also asked about whether there is any retribution for S&P's downgrade of U.S. debt in August, 2011.

The suit is likely to re-open debate over the role of credit rating agencies in the financial system, a role that is at least partly by design. The SEC in 1975 began certifying ratings by select credit agencies the government called  Nationally Recognized Statistical Rating Organizations. That designation meant that the financial markets could regard firms' ratings as credible. That special status, which some experts have called a "regulatory license," gave these firms enormous competitive advantage and helped cement the dominance of the larger agencies.

More important, the label gave investors, bond issuers and other market players confidence -- or the appearance of it -- that a "AAA" rating meant a security was safe. In an age when banks use securitization to pass along loans, and their underlying risks, to other parties, ratings became less a measure of asset quality than a government-endorsed stamp of approval.

Although lawmakers debated abolishing the use of NRSROs following the housing crash, they have yet to take action. In principle, that would open the ratings industry to new competitors and force regulators and investors to develop new ways of evaluating credit.