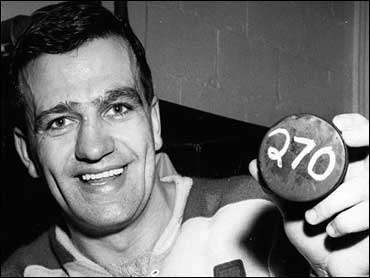 Hockey Hall of Famer Bernie "Boom Boom" Geoffrion died Saturday after a battle with stomach cancer. He was 75.

Geoffrion died in an Atlanta hospital, the Montreal Canadiens said. His stomach cancer was discovered during surgery last week.

Credited with inventing the slap shot, Geoffrion was a scoring star on powerhouse Canadiens teams that won six Stanley Cups in the 1950s and early 1960s. In 1960-61, he won the Hart Trophy as the league's MVP after becoming the second player to score 50 goals in a season. Teammate Maurice "Rocket" Richard was the first. Geoffrion later came out of retirement to join the Rangers for two seasons.

The Canadiens planned to proceed with a scheduled ceremony to retire Geoffrion's No. 5 jersey before Saturday night's game against the New York Rangers. Geoffrion's wife, Marlene, his three children and his grandchildren were all expected to attend.

He was hired as coach of the Rangers, but didn't even get to start the season because ulcers forced him to have surgery to remove part of his stomach.

He was elected to the Hall of Fame in 1972, and, that same year, became coach of the expansion Atlanta Flames. He led Atlanta to a 77-92-39 record from 1972-75, including a playoff berth in the franchise's second season, before he had to leave because of health reasons.

Geoffrion became Montreal's coach in 1979, replacing Scotty Bowman. He went 15-9-6 before stepping down because of problems with the team's management.

Geoffrion was admitted to a hospital last week in Atlanta, where he has lived since coaching the Flames in the 1970s. Doctors tried operating but discovered the cancer had spread too much.