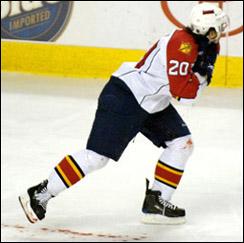 "He was very scared," Vokoun said, describing the frightening scene after the right side of Zednik's throat was accidentally sliced by teammate Olli Jokinen's skate during a game at Buffalo on Sunday night. "He was conscious, I guess. His eyes were closed, but he was moving and moaning."

As the Panthers traveled home to south Florida following a 5-3 loss, the team announced Zednik was stable and resting comfortably at Buffalo General Hospital after having surgery to close the gash that led the forward to leave a long trail of blood on the ice.

A 12-year NHL veteran, Zednik was hurt with 9:56 left in the third period in the right corner of the Sabres zone.

Zednik was circling the net behind the play and skating into the corner just when Jokinen was upended by Sabres forward Clarke MacArthur. Jokinen fell headfirst to the ice, and his right leg flew up and struck Zednik directly on the side of the neck.

Clutching his neck, Zednik somehow had the capacity to race the three-quarters length of the ice to the Panthers bench, where he nearly fell into the arms of trainer Dave Zenobi, who immediately placed a towel on the player's throat. With the help of defenseman Jassen Cullimore, Zednik was escorted up the tunnel behind the Panthers bench and loaded into an ambulance.

Jokinen was sickened when he watched the replay and learned it was his skate that caused the cut, leaving the Panthers' captain in no mood to continue playing.

"It was terrifying," Jokinen said. "If it was my call, I would have gone to the hospital with him."

Play resumed after a 15-minute delay, during which time crews scraped the blood off the ice and the surface was cleaned by Zambonis. NHL officials briefly considered stopping the game, but determined to continue playing after knowing that Zednik was stable and the two teams were willing to go on.

Panthers spokesman Justin Copertino said the team was making arrangements to have Zednik's wife, Jessica, fly from South Florida to Buffalo by a charter flight Sunday night. Zenobi and assistant general manager Randy Sexton also stayed behind to be with Zednik, Copertino said.

Hospital spokesman Mike Hughes said he expected the Panthers to provide an update on the player's condition on Monday.

A hush fell over the crowd at HSBC Arena after Zednik was hurt. It wasn't until the public address announcer said Zednik was in stable condition that fans gave a lengthy standing ovation.

Players on both benches, though, were still shaken.

"It was pretty solemn," Sabres coach Lindy Ruff, said describing the mood on his bench. "There wasn't a lot being said (on the bench). There was just more concern for Richard than anything else.

"I can fully understand if they wanted to cancel the whole game," Ruff added. "When you see something like that, it isn't about playing anymore. But I said, 'We're going to finish the game and it's going to be what it's going to be."'

The NHL released a statement, saying: "The thoughts and prayers of the NHL family are with Richard Zednik, his loved ones, his teammates and the Florida Panthers organization."

Sabres general manager Darcy Regier credited both Zednik for having the awareness to head to the bench and also the NHL for mandating physicians be on hand and near the bench during games. Regier said doctors were already waiting in the tunnel behind the Panthers' bench when Zednik was escorted off.

Zednik's injury was eerily reminiscent of an injury sustained by Sabres goaltender Clint Malarchuk about 19 years ago at Buffalo's Memorial Auditorium. On March 22, 1989, Malarchuk severed his jugular vein when St. Louis Blues forward Steve Tuttle was upended while skating toward the crease, slicing Malarchuk with a skate.

Malarchuk required over 300 stitches but spent only one night in the hospital, returning to practice after four days. On April 2, he played the final five minutes in the season finale, less than two weeks after his injury.

It was the second serious injury caused by a skate this weekend.

On Saturday, NHL linesman Pat Dapuzzo needed dozens of stitches to close a cut on his face after he was hit by the skate of Philadelphia Flyers forward Steve Downie in a game against the New York Rangers.

Dapuzzo, scheduled to retire at the end of the season, didn't return after the second-period injury.

Zednik has 15 goals and 11 assists this season, and had a four-game point streak (three goals, six assists) end on Sunday.

"I can't imagine what he was going through," Panthers defenseman Bryan Allen said. "What saved the situation was he had the mental ability to get to the bench and get to the dressing room, not stay on the ice. Those few seconds could have been the difference."