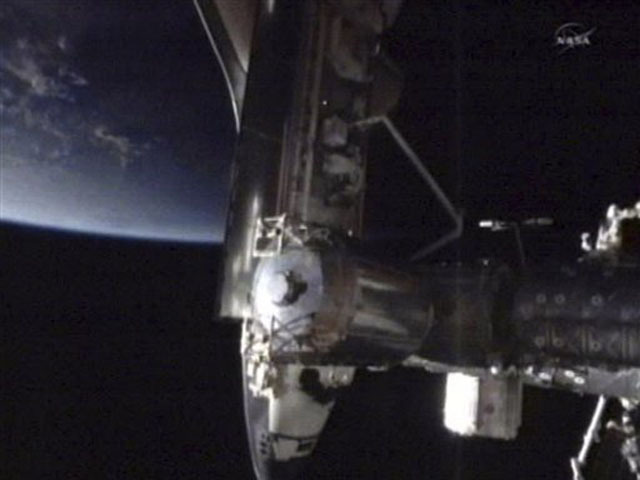 CAPE CANAVERAL, Florida (AP) - Endeavour and its six astronauts showed up at the International Space Station on Wednesday with the most expensive payload ever carried by a shuttle, a $2 billion magnetic device that scientists hope will unravel the mysteries of the cosmos.

The two orbiting crews will attach the Alpha Magnetic Spectrometer to the space station Thursday. Endeavour - making its final journey and the next-to-last flight of NASA's shuttle era - docked with the space station as the two vessels soared more than 200 miles (320 kilometers) above the planet, near Chile. .

Commander Mark Kelly steered Endeavour in for the slightly early linkup. He is married to wounded Arizona congresswoman Gabrielle Giffords, who attended the shuttle launch Monday. Giffords was shot in the head Jan. 8 during an assassination attempt that also killed six people and injured 12 others at a political event in Tucson, Arizona. .

The space station crew rang the ship's bell to mark Endeavour's arrival. It is the 12th and final visit by Endeavour to the space station; after this mission, the baby of NASA's shuttle fleet will be decommissioned and sent to a museum in Los Angeles. .

Atlantis will carry out the final shuttle trip in July. .

Kelly and his crew will spend nearly two weeks at the space station. Their main job is to install the 7-ton Alpha Magnetic Spectrometer, an international collaboration representing 16 countries and led by Nobel-winning physicist Samuel Ting of the Massachusetts Institute of Technology. .

At the heart of the spectrometer is a 3-foot (one-meter), doughnut-shaped magnet. The instrument will seek out invisible dark matter as well as antimatter; whether any of this is found or not, the results will help explain what the universe is made of and how it formed. .

As soon as the spectrometer is installed, it immediately should begin collecting data. Ting expects to start receiving data within an hour or two. .

The AMS will remain anchored to the space station for the rest of its life. The outpost will continue to operate until at least 2020. .

Endeavour's crew also will unload spare parts for the space station and carry out four spacewalks, the first one scheduled for Friday. .

For now, 12 astronauts are aboard the shuttle-station complex. On Monday, three of the six space station residents will climb into their Russian Soyuz capsule and return to Earth after a five-month stay. Endeavour's two-week launch delay resulted in the mission interruption. .

NASA will continue to rely on Russia to transport U.S. astronauts back and forth to the space station for the foreseeable future. The space agency wants private companies in America to take over this operation, hopefully within a few years. .

The Obama administration wants NASA focusing on interplanetary travel, once the shuttles are retired.v