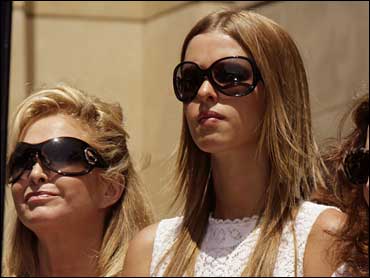 Barbara Walters was honored with Star No. 2,340 on the Hollywood Walk Of Fame Thursday as the mother and sister of prisoner number 9818783 looked on.

Paris Hilton's mom Kathy and sister Nicky were guests of the television journalist and "The View" creator and host.

"Some people seemed more into the fact that they were there than that Barbara was getting her star," blogger MK of Popbytes.com told The ShowBuzz. "Photographers were swarming them. Nicky did stop for autographs, Kathy posed for a few pictures. They were being gracious, which I think they do need to do to keep their public image on the nice side right now. It was definitely a public appearance on their part. I guess there were no visiting hours in jail today."

Walters' "The View" co-hosts Joy Behar and Elisabeth Hasselbeck were also there for the ceremony.

2LAPD chief William Bratton greeted Walters with a kiss as fans looked on. Walters told the crowd that she regards the honor highly, but joked that now the producers of her show can literally walk all over her.

This was not the first interaction between the Hiltons and Walters this week. On Sunday, Paris Hilton made a collect call to Walters and discussed her state of mind and how jail has changed her. On Monday, Walters read quotes from her discussion with Hilton on "The View."