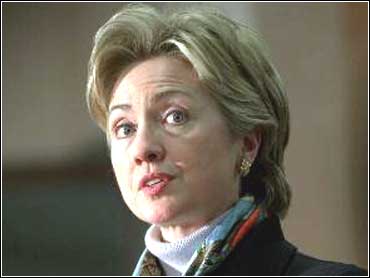 An angry, exasperated and emotional Hillary Rodham Clinton has firmly denied allegations that she once used as anti-Semitic slur more than a quarter century ago.

The first lady, a Democrat who's running for the U.S. Senate in New York State, said on Sunday that the alleged 1974 incident - described in a forthcoming book by a former tabloid reporter - never occurred.

"It did not happen," Clinton told reporters at a news conference outside her home in suburban Chappaqua, N.Y. which she and the president purchased to establish residency in New York for her Senate run.

Saying "I am very angry," Clinton called the report "politics of destruction" and "politics of the worst kind," but she did not say who she thought might be behind it.

"Why people are accusing me of this is certainly beyond my understanding," said the first lady.

The alleged quote, contained in the upcoming book State of the Union: Inside the Complex Marriage of Bill and Hillary Clinton by former National Enquirer reporter Jerry Oppenheimer, was confirmed by former Clinton campaign worker Neill McDonald, according to the New York Daily News.

Previous biographies of the Clintons have also said there was an argument between Fray and Mrs. Clinton, but none of those books mentioned any slur. The allegation was first reported on Friday by Internet gossip writer Matt Drudge, who made his name documenting details and unsubstantiated rmors of Monica Lewinsky scandal that led to President Clinton's impeachment.

McDonald told the Daily News that the remark was made "in the heat of battle" and was not a reflection of anti-Semitism by Clinton.

On Sunday, the Clinton Senate campaign released copies of a handwritten letter from Paul Fray to Hillary Clinton, dated July 1, 1997, in which he states: "I have wronged you. I ask for your forgiveness because I did say things against you, and called you names, not only to your face - but behind your back ... names that are unmentionable."

Fray adds: "At one time in my life, I would say things without thinking, without factual foundation ... I beg your forgiveness."

Clinton said she was releasing the letter to show that "there's a history of these kinds of charges coming from the people in question. They've been false in the past. They're false now."

Howard Wolfson, Clinton's campaign spokesman, blasted the Fray allegation of an anti-Semitic slur as "a pathetic lie written by a National Enquirer reporter about events that never happened 26 years ago ... It is clearly designed to divide the Jewish community."

Long Island Congressman Rick Lazio, Clinton's GOP rival for the Senate seat being vacated by Democrat Daniel Patrick Moynihan, told reporters that he thought it would be best if he did not comment on the allegations. But John Faso, the GOP leader of the New York State Assembly, said Clinton owes New Yorkers an apology and an explanation.

In a written statement, Sen. Charles Schumer (D-N.Y.), who is Jewish, said, "I've known Hillary Clinton for eight years, and she doesn't have an anti-Semitic bone in her body."

Jewish voters, the majority of whom traditionally support Democrats, make up a significant voting group in New York. Clinton leads Lazio among Jewish voters in polls, but the two have run about even overall since Lazio entered the race after the withdrawal of New York City Mayor Rudy Giuliani.