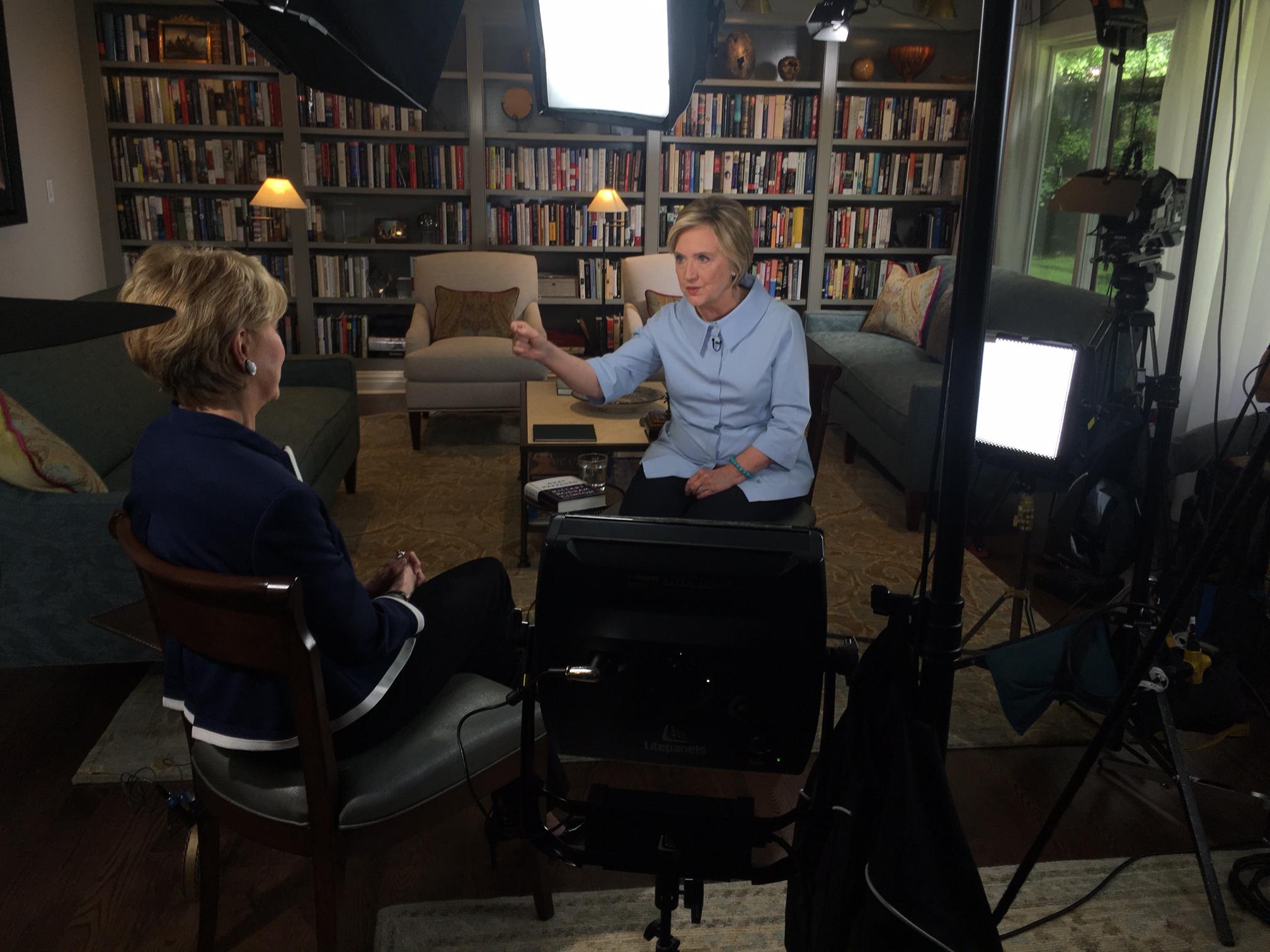 Hillary Clinton has spent the last 10 months trying to figure out why she isn't the president of the United States.

"I am good," Clinton told "Sunday Morning" anchor Jane Pauley. "But that doesn't mean I am complacent or resolved about what happened. It still is very painful. It hurts a lot." Jane Pauley:

As the polls closed, Clinton's supporters gathered in a New York City convention center, expecting to see history being made.  But as the returns came in, the celebratory mood began to fade.

"I just kinda went in the bedroom, laid down on the bed, just thought, 'Okay. I just have to wait this out,'" Clinton said. "But then, midnight, I decided, 'Well-- you know, looks like it's not gonna work.'"

After midnight, she called Donald Trump, the president-elect.  And then she called the White House.

"I felt like I had let everybody down," she said.

Morning came, and the nation was waiting to hear from her.

"I had not drafted a concession speech. I'd been working on a victory speech," she laughed.

And then, on what she thought would be her first day as president-elect, Hillary and Bill Clinton headed to their home in Chappaqua, New York.

"I just felt this enormous letdown, just kind of loss of feeling and direction and sadness," Clinton said. "And, you know, Bill just kept saying, 'Oh, you know, that was a terrific speech,' tryin' to just kinda bolster me a little bit. Off I went, into a frenzy of closet cleaning, and long walks in the woods, playing with my dogs, and, as I write-- yoga, alternate nostril breathing, which I highly recommend, tryin' to calm myself down. And-- you know, my share of Chardonnay. It was a very hard transition. I really struggled. I couldn't feel, I couldn't think. I was just gob-smacked, wiped out."

Weeks passed.  But she couldn't remain in seclusion forever.

"You know, after the first of the year, I had a big decision to make. Was I going to go to the inauguration?" she said.

Defeated candidates don't necessarily attend the inauguration, but Clinton was in a unique position.

"But I'm a former first lady, and former presidents and first ladies show up," she said. "It's part of the demonstration of the continuity of our government. And so there I was, on the platform, you know, feeling like an out-of-body experience. And then his speech, which was a cry from the white nationalist gut."

On January 20, Mr. Trump took the oath of office and delivered his inauguration speech.

Said Clinton of the speech: "What an opportunity to say, 'Okay, I'm proud of my supporters, but I'm the president of all Americans.' That's not what we heard at all."

Clinton had been so sure she'd be the one giving that inaugural speech.

"Well I know a lot about what it takes to move a president.  And I thought I was going to win," she said.

The Clintons had acquired the house next door, to accommodate White House staff and security during a second Clinton Administration.

At a dining room table in that house, she wrote about "What Happened."

"I couldn't get the job done, and I'll have to live with that for the rest of my life," Clinton wrote in the memoir.

So:  What did happen?  Hillary Clinton was supposed to make history as the first woman president of the United States.

"I started the campaign knowing that I would have to work extra hard to make women and men feel comfortable with the idea of a woman president," she said. "It doesn't fit into the-- the stereotypes we all carry around in our head.  And a lot of the sexism and the misogyny was in service of these attitudes. Like, you know, 'We really don't want a woman commander in chief.'"

"He was quite successful in referencing a nostalgia that would give hope, comfort, settle grievances, for millions of people who were upset about gains that were made by others because—" Clinton said.

"What you're saying is millions of white people," Pauley said.

And then the Russians.  American intelligence began picking up signals that Moscow was attempting to influence the election in Trump's favor -- both by hacking into Democratic National Committee e-mails and by spreading false information online.

"The forces that were at work in 2016 were unlike anything that I've ever seen or read about. It was a perfect storm," Clinton said.

But there were serious self-inflicted wounds too.

"Were there things that, had you not, but for that, might be the president?" Pauley asked.

"Oh, I think the-- the most important of the mistakes I made was using personal email," Clinton said.

A stream of explanations for her decision to use a private email server while she was secretary of state never satisfied critics or the press.

"I've said it before, I'll say it again, that was my responsibility," she said. "It was presented in such a negative way, and I never could get out from under it. And it never stopped."

Not even after the director of the FBI, James Comey, cleared her of any criminal charges.

"We cannot find a case that would support bringing criminal charges on these facts," Comey said, while adding a post-script that stuck: "There is evidence that they were extremely careless in their handling of very sensitive, highly classified information."

"I don't know quite what audience he was playing to, other than-- maybe some, you know, right-wing commentators, right-wing members of Congress, whatever," Clinton said.

The email investigation appeared to be over -- until late October.

With early voting already underway in some states, traces of Clinton's emails were discovered on a home computer of the estranged husband of her close aide—Huma Abedin.  Anthony Weiner was the former congressman who was being investigated in a sexting scandal.

"Eleven days before the election. And it raised the specter that, somehow, the investigation was being reopened," Clinton said. "It just stopped my momentum. Now, remember this, too, Jane. At the same time he does that about a closed investigation, there's an open investigation into the Trump campaign and their connections with Russia. You never hear a word about it. And when asked later, he goes, 'Well, it was too close to the election.' Now, help me make sense of that. I can't understand it."

No new improprieties were discovered.  But Clinton believes Comey's 11th-hour intrusion cost her the election.

And then there was the harm she believes was done by Bernie Sanders, her fiery populist primary opponent. Clinton writes: "His attacks caused lasting damage, making it harder to unify progressives in the general election and paving the way for Trump's 'Crooked Hillary' campaign."

But Hillary Clinton looks inward too, acknowledging a tone that didn't fit the political landscape of 2016.

"I understood that there were many Americans who, because of the financial crash, there was anger," she said. "And there was resentment. I knew that. But I believed that it was my responsibility to try to offer answers to it, not to fan it. I think, Jane, that it was a mistake because a lot of people didn't wanna hear my plans. They wanted me to share their anger. And I should've done a better job of demonstrating I get it."

There were some memorable verbal gaffes, including when she said at a campaign appearance: "You could put half of Trump's supporters into what I call the basket of deplorables."

"Why do you think that word deplorable had been circulating in your mind?" Pauley asked.

"Well, I thought Trump was behaving in a deplorable manner," Clinton said. "I thought a lot of his appeals to voters were deplorable. I thought his behavior, as we saw on the 'Access Hollywood' tape, was deplorable. And there were a large number of people who didn't care. It did not matter to them. And he turned out to be a very effective reality TV star."

Clinton says she thinks her rival's opponents were "already energized" before her "deplorable" comment but conceded: "I'm sorry I gave him a political gift of any kind."

"I don't think that was determinative," Clinton said.

"After we heard him admitting and laughing about sexually assaulting women and being able to get away with it because if you're a star, you can do anything. So in my debate prep, we practiced this," she said. "The young man playing Trump would stalk me. And I practiced keeping my composure. I practiced not getting rattled. Well, it's one thing to practice it. It's another thing to be in front of, you know, 50 million, 60 million, 70 million people and having him scowling and leering and moving up on me. And-- it-- it was so discombobulating.

"And so while I'm answering questions, my mind is going, 'Okay, do I keep my composure? Do I act like a president?' Or do I wheel around and say, 'Get outta my space. Back up, you creep'? Well, you know, I didn't do the latter. But I think in this time we're in, particularly in this campaign, you know, maybe I missed a few chances."

Clinton says her career as an active politician is over but says she will stay involved politically.

"I am done with being a candidate. But I am not done with politics because I literally believe that our country's future is at stake," she said.

In the end, Hillary Rodham Clinton still seems gob-smacked by "what happened."  She dishes out blame and she accepts responsibility. But while she's proud of her effort, she writes she was "running a traditional presidential campaign, while Trump was running a reality show."

"We have a reality show that leads to the election of a president. He ends up in the Oval Office. He says, 'Boy, it's so much harder than I thought it would be. This is really tough. I had no idea.' Well, yeah, because it's not a show. It's real. It's reality for sure," Clinton said.

"What Happened" will be published by Simon & Schuster, a division of CBS Corporation, on September 12.