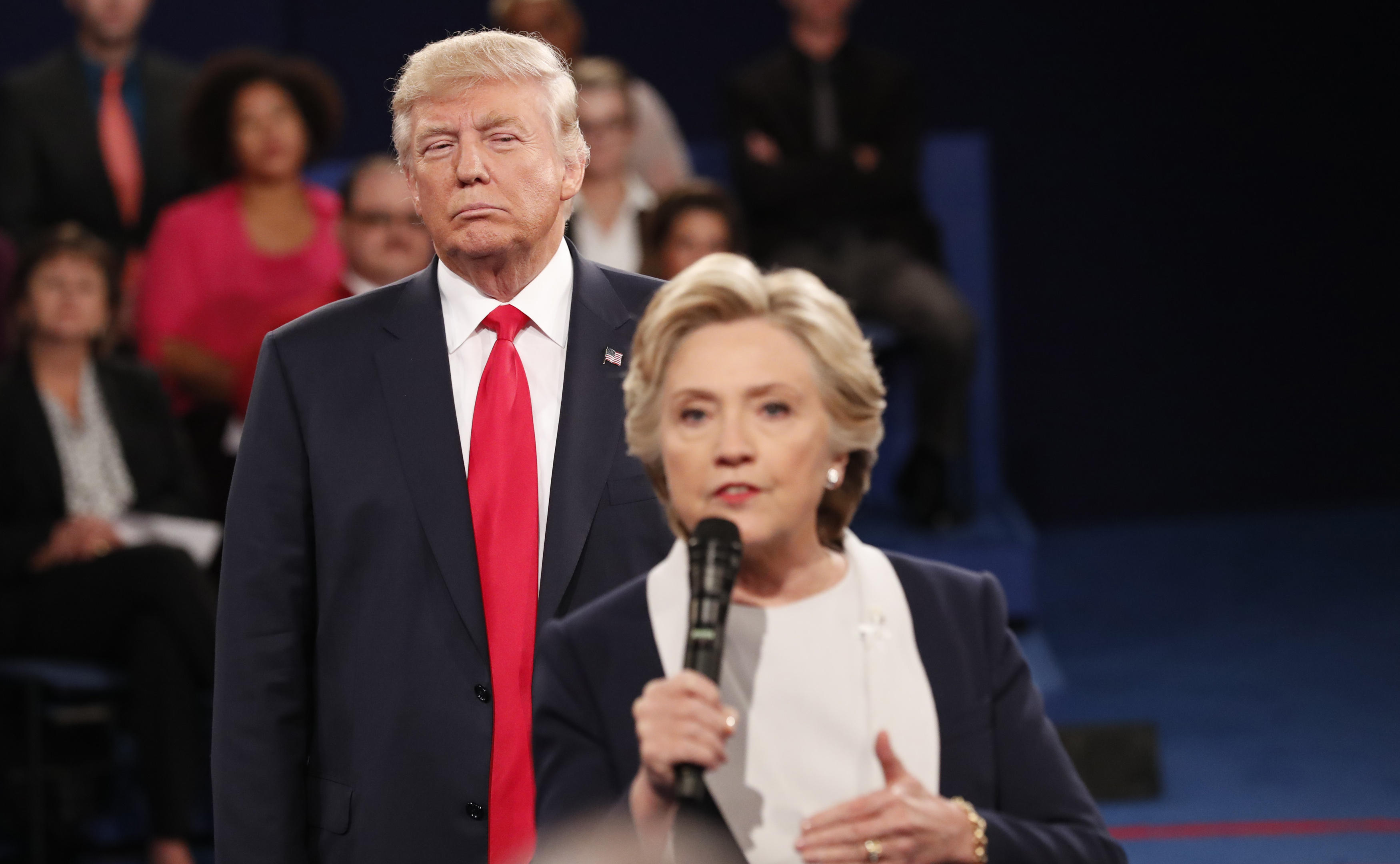 Hillary Clinton's upcoming book "What Happened" is set to reveal her personal experiences over the course of the 2016 campaign, but in new excerpts obtained by MSNBC, the former presidential candidate gets candid about a memorable debate with her former challenger, President Donald Trump, a moment she said was "incredibly uncomfortable."

"Now we were on a small stage and no matter where I walked, he followed me closely, staring at me, making faces. It was incredibly uncomfortable.  He was literally breathing down my neck. My skin crawled," Clinton wrote in the book excerpt. "It was one of those moments where you wish you could hit pause and ask everyone watching, 'well, what would you do?'"

Clinton went on, questioning her next move during the televised debate.

"Do you stay calm, keep smiling and carry on as if he weren't repeatedly invading your space or do you turn, look him in the eye and say loudly and clearly, 'Back up you creep, get away from me. I know you love to intimidate women but you can't intimidate me. So back up."

Clinton writes that she went with the first option instead -- keeping her cool, aided by what she referred to as a "lifetime of difficult men trying to throw me off." The former candidate said she gripped her microphone extra hard during the tense debate, conceding that perhaps she has "over-learned the lesson of staying calm, biting my tongue, digging my fingernails into a clenched fist, smiling all the while, determined to present a composed face to the world."

Following the stunning October debate, Clinton's campaign conveyed that Mr. Trump had "crossed a line", deflecting the negative criticism he received for this lewd 2005 video onto former President Bill Clinton, as Clinton sat watching in the front row.

"If you look at Bill Clinton, far worse. Mine are words, and his was action," Mr. Trump said.

Other notable moments from the debate included Mr. Trump threatening to investigate Clinton for her use of a private email server if he were to win the presidency, as well as referring to Clinton as the "devil."

The new excerpts show a more open Clinton, admitting her faults as a candidate but also providing her supporters a chance to understand what exactly went wrong during the contentious campaign.

"I don't have all the answers and this isn't a comprehensive account of the 2016 race. I want to pull back the curtain on an experience that was exhilarating, joyful, humbling, infuriating and just plain baffling," Clinton wrote.

She added, "Every day that I was a candidate for president, I knew that millions of people were counting on me. And I couldn't bear the idea of letting them down. But I did. I couldn't get the job done and I'll have to live with that for the rest of my life."

In the introduction of the novel, Clinton writes: "In the past, for reasons I try to explain, I've often felt I had to be careful in public, like I was up on a wire without a net. Now I'm letting my guard down."

"What Happened" will be published by Simon & Schuster, a division of CBS Corporation, on September 12.