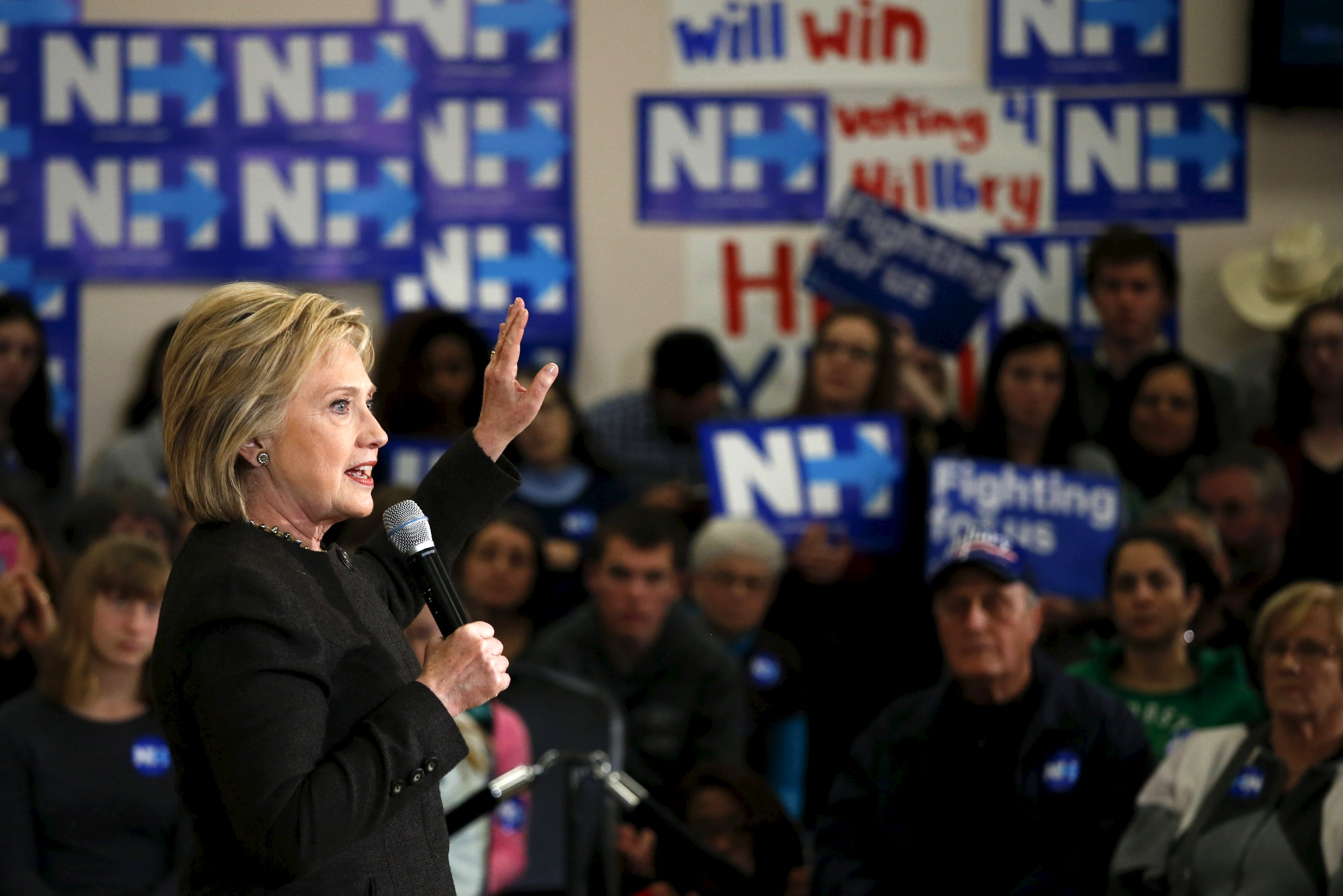 DOVER, New Hampshire -- Though she arrived in New Hampshire in the early hours of the morning on Tuesday, as her campaign declared a victory, by a hair, over Bernie Sanders in Iowa, Hillary Clinton is keeping expectations low in New Hampshire. On Wednesday morning in Derry, the former secretary of state was quick to point out one of her biggest challenges in the Granite State: Her rival is from the state right nextdoor, Vermont.

"I come here well aware of the fact that a lot of political pundits have been opining...that I should have just skipped coming to New Hampshire," she said, speaking to a crowd of several hundred of her supporters gathered at the local Boys and Girls Club. "Their argument is, look, you're behind here, you're in your opponent's backyard."

"New Hampshire always favors neighbors," she added, "which I think is neighborly."

Sanders' campaign has taken issue with that idea, suggesting it's an insult to Granite State voters.

"The people of New Hampshire are serious about their role in the nominating process," Sanders' state director, Julia Barnes, said in a statement. "I know that because our organizers are talking to voters every single day about the issues that matter to them. Whether it's equal pay, more secure retirement or affordable health care, the people of New Hampshire will go to the polls Tuesday and vote for the candidate they believe will fight for them. To repeatedly suggest otherwise is an insult to voters in the Granite State."

Sanders has been consistently outperforming Clinton in the polls in New Hampshire. The latest CBS News Battleground Tracker poll showed the Vermont senator with a nearly 20-point lead over Clinton here, with 57 percent of likely Democratic primary voters picking him as their first choice.

But despite Sanders' popularity in the state, Clinton isn't shying away from defending her record as more progressive than her opponent's. On Tuesday, Sanders said to reporters in Keene that Clinton was a progressive "some days." Clinton called that comment a "low blow."

"There have been a lot of good days when I have stood with friends like the Brady Campaign and Gabby Giffords and Mark Kelly to take on the gun lobby relentlessly, persistently," she said in Derry, where the former and her husband joined her on stage. "There are some good days for progressives when Planned Parenthood and the Human Rights Campaign and unions representing 11 million workers endorsed me, because we've been fighting the progressive fight and getting results for people for years."

She added: "If it's about our records, hey, I'm gonna win by a landslide."

Sanders took umbrage at the idea that Clinton was laying claim to the progressive mantle.

Clinton's campaign has been working hard to close the gap with Sanders in New Hampshire, while her top aides acknowledge that it's a tall order. Staffers in her 11 offices across the state have started to mail signed "Commit to Vote" cards back to Clinton's supporters, as a reminder to fulfill their pledge when the polls open on Tuesday. More than 10,000 volunteers have been a part of the months-long effort here and, in the final days, over 100 members of Clinton's Brooklyn-based staff will be in the state to lend a hand.

Former President Bill Clinton is also campaigning for her in New Hampshire, the state that helped him stage a comeback during his own presidential campaign.

"I think she's gonna do surprisingly well," he told reporters gathered along the rope line in Nashua on Tuesday. "We've got a lot of friends here and people who believe in her."

The Clintons visited a Market Basket grocery store in Manchester together on Tuesday afternoon, where Clinton could be heard reminding well-wishers to remember to vote.

Also visiting the state on Clinton's behalf: Vermont's governor, Peter Shumlin, and former governor, Madeleine Kunin, who will meet with volunteers in Keene, Claremont and Lebanon on Thursday.

The message that Clinton is the candidate on the Democratic side who can "get results" is one the Clinton campaign has tried to amplify, as Sanders's campaign has turned out large crowds of first-time voters inspired by his message and call for change. In Derry, Clinton asked voters to consider both their "hearts" and their "minds" when making their decision.

"You have to be led by your heart if you are in public life," she said. "But the heart has to be matched with your head. How do you take what you know, what you see, what you feel, and translate it into action into your life, in politics, in business, in any other kind of endeavor."