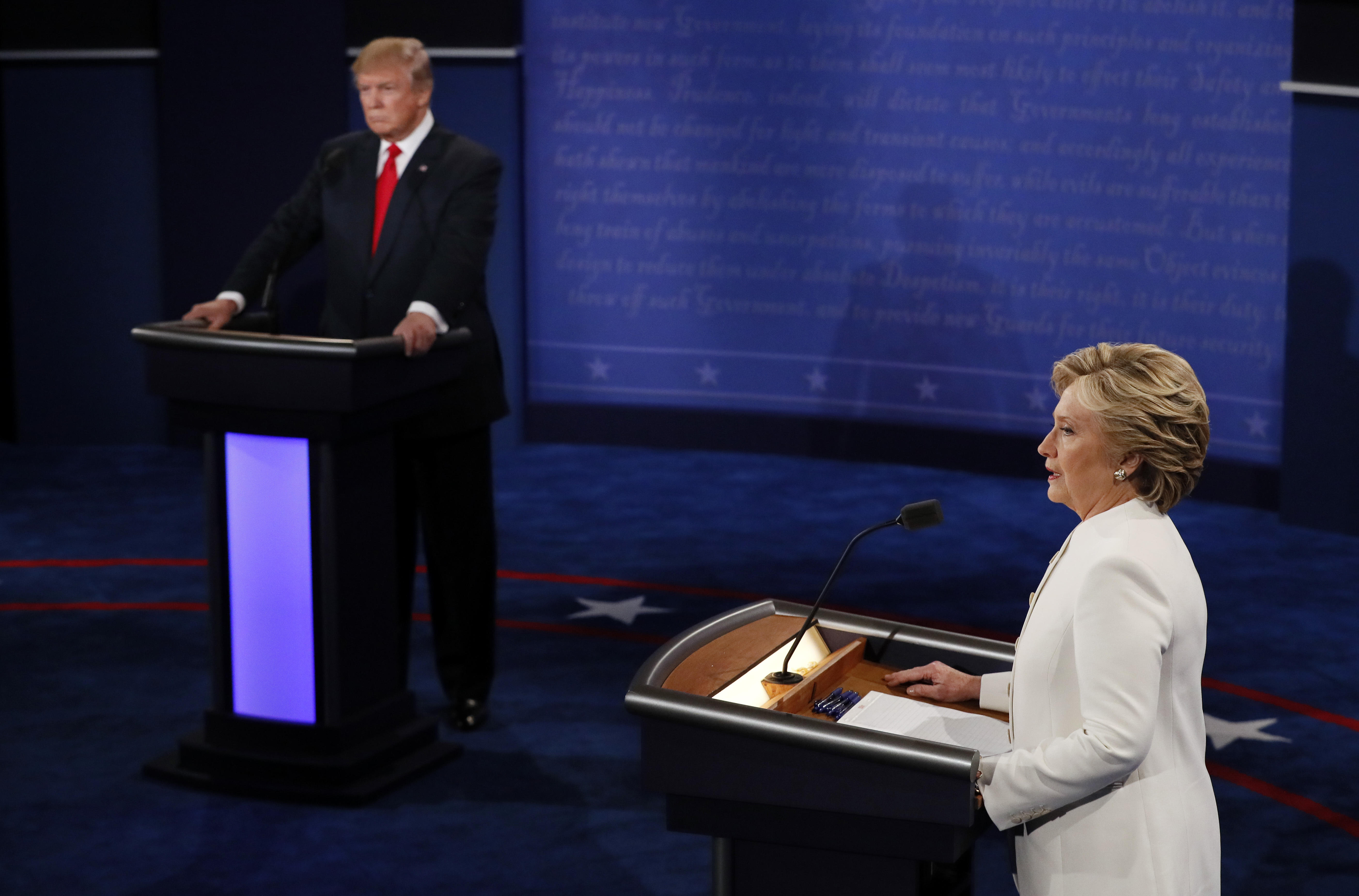 A few notes up top about that last presidential debate – which, by the way, Hillary Clinton won.

The first and most obvious thing to talk about is Donald Trump saying that he will keep us all “in suspense” about whether he’ll respect next month’s election results. That’s obviously an unprecedented statement, and one that goes to the heart of what people worry about with Trump, namely his stability and fitness for office.

That brings us to a strange and remarkable ability Trump has repeatedly shown in these debates, particularly tonight: he makes Clinton seem not only sympathetic, but earnest. When she said his above statement was “horrifying,” it rang true because she probably does think that. And I imagine a lot of voters, even some Trump leaners, thought the same thing.

Trump has gotten a lot of mileage out of insults and threats since he began his campaign some 16 months ago. It’s the way he operates, in keeping with his whole deal-making ethos of making outlandish pronouncements and then forcing others to meet him in the middle.

But while it was kind of cute when he kept going back and forth on whether he would support the eventual GOP nominee, it’s something else to insinuate you’ll object to a peaceful transfer of power because you got your feelings hurt.

Clinton was prepared for Trump. She’d done her homework, and accurately noted that Trump used to issue these kinds of protests when he was denied an Emmy. Now he’s threatening to throw America into crisis because he might feel similarly robbed. Call me crazy, but I expect this latest Trump gambit won’t play very well with swing voters.

Some people will say that’s the moment he lost the debate. I’d argue that he lost it decisively long before that, when he turned an able question from moderator Chris Wallace into a spiel about the latest round of videos from conservative filmmaker James O’Keefe.

“Well, first of all, those stories have been largely debunked,” Trump said of the women’s stories, which is of course untrue. Then it was all about the O’Keefe videos, and how they supposedly prove Clinton and President Obama “caused the violence” at his Chicago rally last spring – the one that devolved into a kind of riot just as the Republican primaries came to a close.

Then it was Clinton’s turn to talk about women, and again she seemed earnest, transmuting their stories into a relatable narrative of abuse and harassment. “I don’t think there is a woman anywhere who doesn’t know what that feels like,” Clinton said of being subjected to Trump’s alleged behavior.

Trump is often funny. It’s part of his appeal, particularly at his rallies. But his big laugh line Wednesday was “nobody has more respect for women than I do,” which I suspect even some hard-core Trump supporters have begun to doubt at this point. “Such a nasty woman,” he said toward the end about Clinton, which seemed much more in keeping with his real feelings.

Another moment worth talking about. Throughout these debates, Trump’s stamina has seemed to abate towards the end. He gets less controlled, more erratic, more prone to the own-goal. Wednesday was no different, where after about an hour in Clinton found herself subjected to some tough questions about play-to-play allegations involving her foundation. She tried to dodge it at first, but Wallace pressed her, and it could have been an ugly moment.

Instead Trump just barged in to the discussion, letting her off the hook. He demanded that we pay attention to him, to what he was saying, during a moment Clinton was clearly on the defensive and Wallace leaning in for the kill. What did he have to say? “It’s a criminal enterprise,” a thing we’ve heard him say many times.

Was Clinton perfect tonight? Of course not. She will always seem a bit slippery. But it was her best debate performance, in part because she wasn’t trying to seem lovable and witty like she has in the last two. She was light on canned zingers, fake smiles, and creaky attempts at reliability. Instead, she easily played the part of the tough, competent, stable person even her detractors typically admit she truly is. She was, it seemed, herself.

Part of that might have to do with her well-earned confidence at this point in the race. We’re quickly getting into foregone conclusion territory with this race, as it’s all but impossible to imagine how Trump can pull off a win. It’s tough to say that it’s all over, of course, if only because a race this weird seems to constantly defy all predictions. But there are no real indicators right now that are trending Trump’s way, and his performance tonight certainly won’t change that.

Trump will almost assuredly lose. The question now is what he’s willing to do to the country once he does.