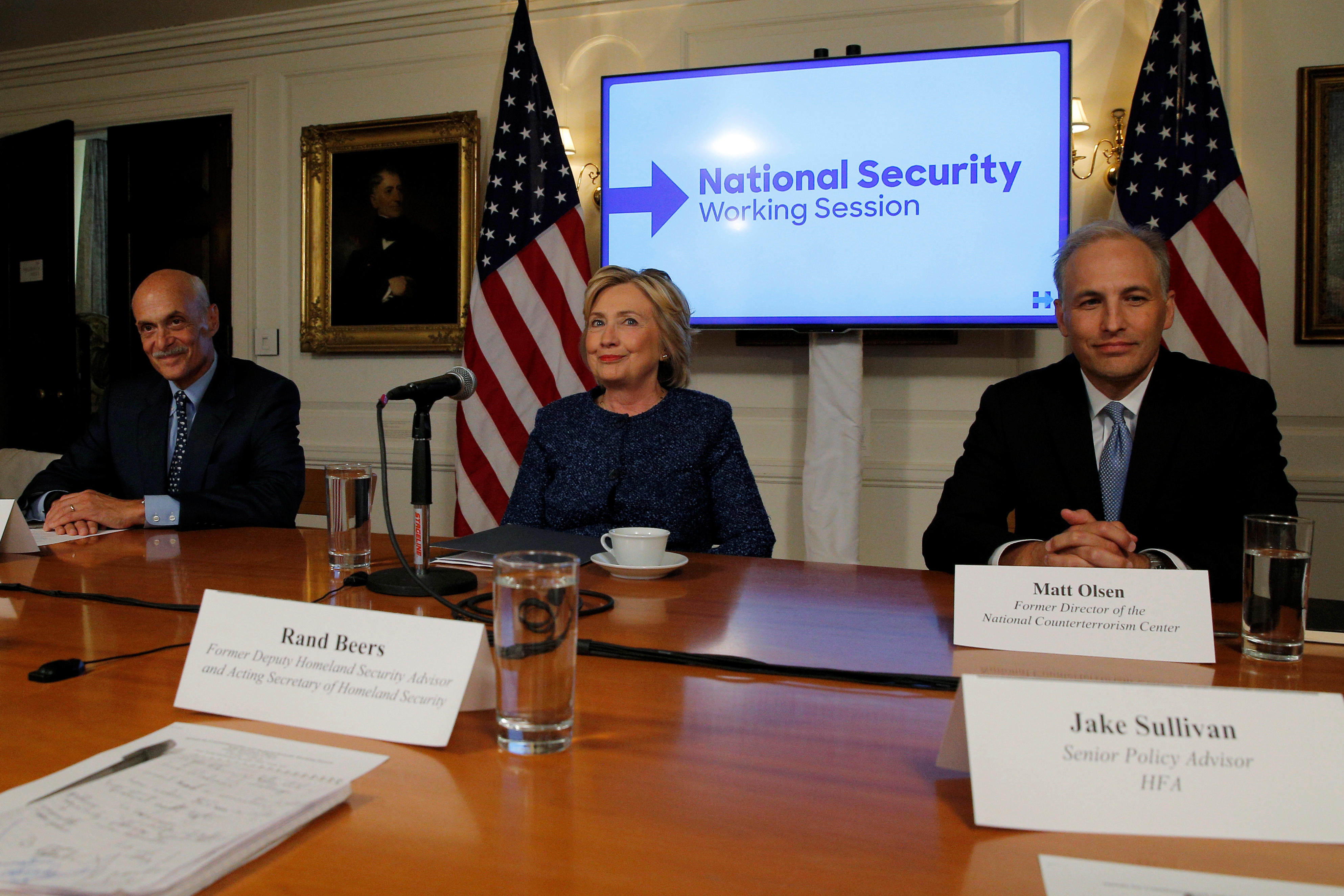 NEW YORK -- Hillary Clinton said on Friday that the United States must “bring the world together to stop North Korea’s dangerous game” and that, if elected, she would pursue negotiations with North Korea similar to those the U.S. pursued with Iran.

North Korea had tested a nuclear weapon on Thursday night, prompting an emergency meeting by the United Nations Security Council.

“As a Senator I voted for every sanction that was put before the Senate against Iran, in our effort to try to prevent Iran from moving forward on a nuclear program,” Clinton said, speaking to reporters after convening a meeting on national security in New York. “They were able to acquire and put into operation a significant number of centrifuges, so our sanctions, despite our best efforts, were not enough and although we have international sanctions against North Korea...they aren’t enough either.”

Clinton said one reason that sanctions are not “enough” is because China has not recognized the threat that North Korea presents, and she said that working with China would be “on the top of [her] list.”

The meeting, a “working session” that took place at the New York Historical Society in Manhattan, focused largely on the threat of the Islamic State, also known as ISIS, and other terrorist groups. Clinton was joined by former security officials and experts from across the political spectrum, including former Secretary of Homeland Security Michael Chertoff, Richard Fontaine, who served as a foreign policy advisor to Sen. John McCain and Michael Morell, former Acting Director and Deputy Director of the Central Intelligence Agency.

Clinton said that North Korea’s “quest for a nuclear weapon” is connected to the threat of ISIS, because “the greatest threat of all would be terrorists getting their hands on loose nuclear material.”

Clinton’s opponent in the race for the White House, Donald Trump, speaking Friday at the Value Voters Summit in Washington, D.C., called the test “one more massive failure from a failed Secretary of State.”

“Her policies have also put Iran onto a path to nuclear weapons, and I have to say, made them overnight an absolute power,” Trump said.

In a statement on the test distributed by her campaign earlier on Friday, Clinton said that it was “another reminder that America must elect a President who can confront the threats we face with steadiness and strength.” Clinton has repeatedly criticized Trump as erratic on the campaign trail and for praising dictators.

When a reporter asked Clinton on Friday about Trump’s appearance on a Russian television network, Clinton paused before taking to the microphone.

“Every day that goes by, this just becomes more and more of a reality television show,” Clinton said of Trump’s operation. “It’s not a serious presidential campaign and it is beyond one’s imagination to have a candidate for President praising a Russian autocrat like Vladimir Putin and throwing his lot in with him.”

Clinton said that “no one who wants to assume the responsibility of being President” should identify “with a regime that has some aggressive tendencies toward our interests, our values, our friends and allies.”

“So can I say I was surprised?” Clinton continued. “I’m not sure anything surprises us anymore but I was certainly disappointed that someone running for President of the United States would continue this unseemly identification with and praise of the Russian president including on Russian television.”