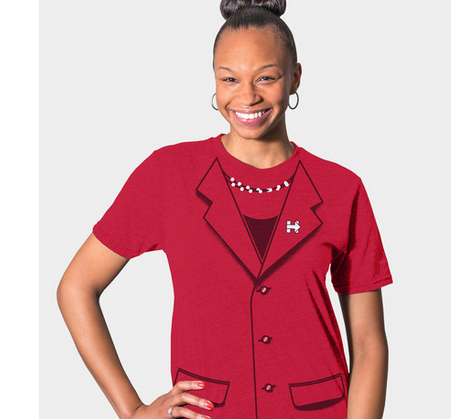 "Pantsuit up," Hillary Clinton tweeted this morning. It's an imperative that will mean less fuss for Clinton supporters who want to take the order to heart, now that the Democratic presidential candidate is selling a $30 "everyday pantsuit tee," a red tee shirt printed with pantsuit lapels, a necklace and "H" broach.

Clinton's affinity for the pantsuit is well known, and she has been making jokes about her affection for pantsuits for years. On the "Late Show With David Letterman" back in 2008, when she last ran for president, she quipped, "In my White House, we'll know who wears the pantsuits.''

She's even incorporated it into her social media profile, referring to herself as a "pantsuit aficionado." On her campaign website, Clinton is also hawking throw pillows embroidered with the words, "A woman's place is in the White House," and for those too young to voice their support, parents can purchase the "H" onesie. All of the merchandise is advertised as "everyday items made by everyday Americans."

Hillary Clinton paraphernalia apparently sells on the sites of her opponents, too. Sen. Rand Paul (R-Kentucky) has an entire drop-down menu in his online campaign store devoted to anti-Hillary merchandise. Shoppers can find there a "Liberty not Hillary" eye chart that alludes to Paul's opthamological background, and Hillary's hard drive - to remind his supporters of the controversy over her use of a private email address while she was secretary of state.

Paul's objections to the NSA's data collection practices are the inspiration for other campaign merchandise on his site, like the $30 filibuster starter kit or the "NSA Spycam Blocker," a $15 device that clips onto the top of a laptop to block the built-in webcam. And one tee shirt that reads, "Don't drone me, Bro!" gets to the heart of his dislike for U.S. drone practices.

Sen. Ted Cruz, R-Texas, is sticking with more traditional campaign gear, like shirts and mugs emblazoned with his name and 2016, as well as tee shirts that read, "Courageous conservatives for Cruz." The online store for Sen. Marco Rubio, R-Florida, is being finalized and should be launching soon, says his communications director, Alex Conant.

Clinton's other declared opponent for the Democratic nomination, Bernie Sanders, also shows a preference for more traditional merchandising, although some of his slogans reveal a certain 1960s counterculture sensibility. In baby blue and white, his campaign decals proclaim, "Vote Bernie...you know you wanna!" or "HONK for a political revolution!"