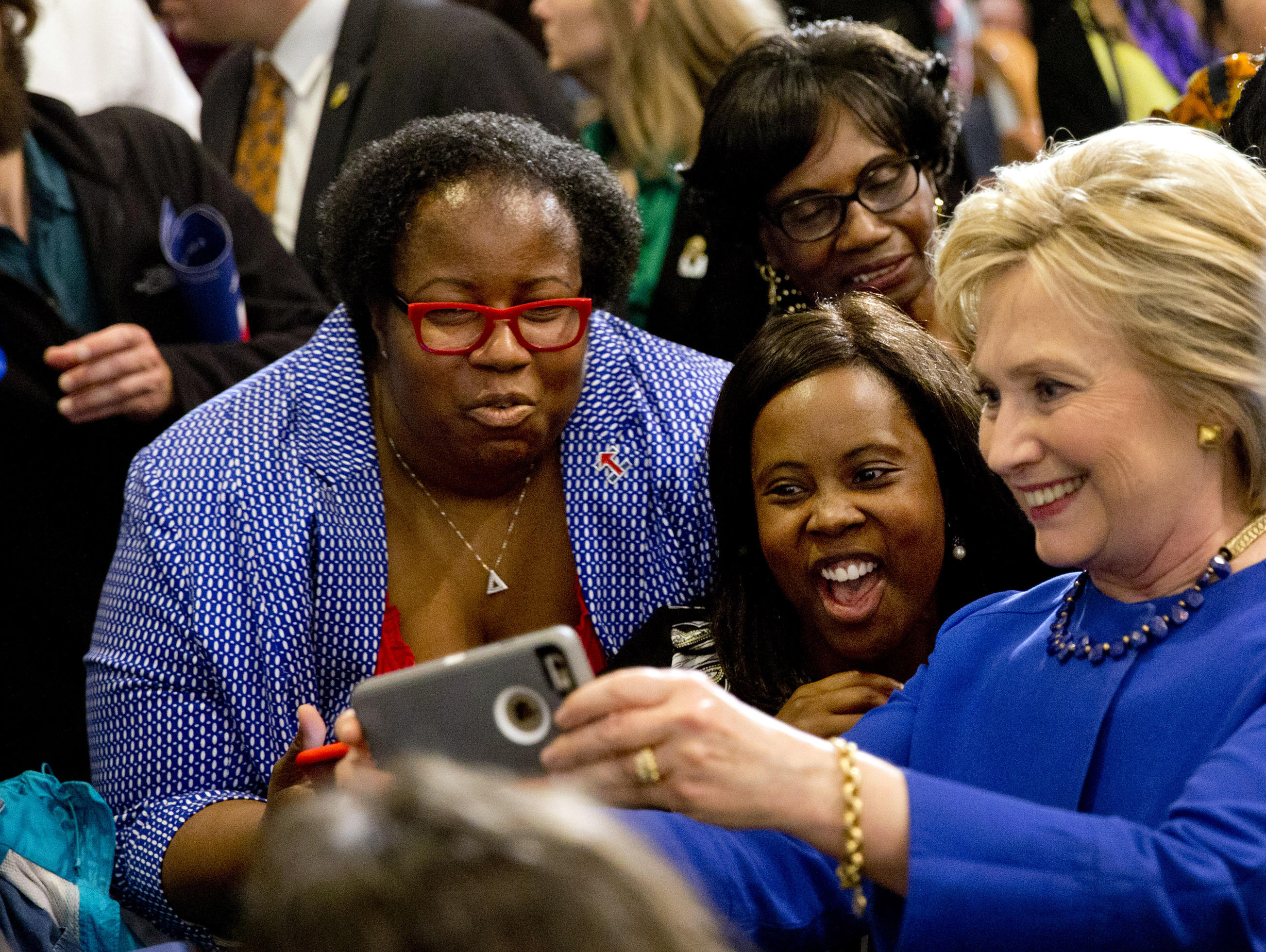 CINCINNATI — Darren Rutledge missed his opportunity to vote for the first African-American president. He was in prison.

Today, Rutledge, his smile flecked with gold, works trimming beards at Incredible Creations Beauty and Barber shop here in downtown Cincinnati. With Hillary Clinton on the presidential ballot in Ohio, Rutledge is eager to have his chance to make a statement with his vote.

“We never had a woman president but we never had a black one neither, so I believe she’s gonna do it,” he said.

The 44-year old barber is precisely the kind of voter Democrats must mobilize here to win again in Ohio, where polls show Donald Trump leading thanks to his strength among working class white voters.

Rutledge is African-American, part of a demographic coalition that flocked to Obama but has been somewhat less enthralled with Clinton. Crucially, his very participation in the election process is owed to a black woman: His sister, an employee at Cincinnati City Hall, helped him register to vote for the first time in 2014.

Black women like Rutledge’s sister are key to Clinton’s hopes in Ohio, especially here in Cincinnati, where they are driving the Democrat’s turnout machinery among minority voters.

They are also some of the most reliable and progressive voters: in 2012, 83 percent of registered black women turned out to vote, 10 points higher than the turnout rate of all other women, according to AFL-CIO data. And according to exit polls, African American voters accounted for 15 percent of the vote in Ohio. Most of them were women.

“Where that comes from, in my opinion, is that black women are born to be collaborators, we run households,” Petee Talley, the Secretary-Treasurer of the Ohio AFL-CIO and herself a black woman, said. “What I’m noticing during this campaign is, look at who is actually deploying to canvass, recruiting volunteers, and doing outreach to all segments of the community. It’s black women.”

This month, Clinton campaign volunteers and allies in the labor movement and other progressive outfits are fanning out across neighborhoods here in Hamilton County - a county that voted Republican for 44 years before Obama flipped it to the Democrats in 2008 by just 30,000 votes.

With traditionally conservative white suburbs and a black urban core, Hamilton County is an emblem of the demographic and racial contours of this election.

Outside the city, in leafy suburbs, the Clinton campaign is making a play for college-educated white voters who might bristle at Trump’s inflammatory rhetoric. Inside the neighborhoods of downtown Cincinnati the campaign is gunning to register and turn out black voters at levels greater than Obama did in 2012.

This past weekend, in the Cincinnati neighborhood of North College Hill, organizers from Working America, the political arm of the AFL-CIO, swept through the area, doing voter registration and persuasion work among voters still deciding between Clinton and Trump.

Further south, in Walnut Hills, Clinton campaign volunteers were checking voter registration and pushing early voting. Volunteers pounding the pavement handed over postcards for voters to sign up for a time and a date to cast their early vote starting October 12.

All of the canvassers door-knocking this weekend with a CBS News reporter in tow were black women driven by two desires: Continue Obama’s legacy and elect the first female president. But without a history-making African-American on the ballot and Trump as a strong negative impetus, their message to voters was focused less on race and Clinton, and more on the economic issues at stake this year.

“Race relations is a big issue, but it’s not the core of this moment, of this election,” Sarah Goss, a 42-year-old human resources consultant and Clinton volunteer, said while canvassing in Walnut Hills on Saturday. “It’s survival mode, people are in survival mode, trying to figure out how to best raise my family. If I’m a single mother, what are the best resources I have?  This is really about what’s going to make families survive.”

Despite a lingering national narrative that Clinton has taken black voters for granted, Cincinnati natives say Clinton and her allies are doing everything possible to motivate African-Americans.

“I don’t think she is struggling to connect with the African-American vote,” said former Cincinnati mayor Jerry Springer. “How do you get the same enthusiasm that Obama got when he was obviously going to be the first African-American president? It’s unfair to hold her to that standard. But the one thing that gives the Democrats a realistic chance of winning this thing is their turnout operation is phenomenal.”

Clinton’s robust campaign operation — they say they now have seven offices in Hamilton County alone — is bolstered by several other progressive groups focused on getting out the vote, including the AFL-CIO and the NAACP.

The Clinton campaign will also launch “Souls to the Polls,” an effort to transport black churchgoers straight to early voting locations after Sunday services once early voting begins.

Talley, of the AFL-CIO, said leaders in Ohio’s black community are working more collaboratively than ever before - even during Obama’s elections.

“Any candidate needs to understand that they don’t get there by themselves, but through validators in the community,” Talley said of the Clinton turnout effort.

At an AFL-CIO training session on Saturday in Cincinnati, Cherika Carter, the labor group’s southwest Ohio field representative, ran 20 volunteers — nearly all of them women — through mock door-knocks, practicing what to say when a union voters expressed resistance to Clinton.

Organizers studied talking points and handouts that defended Clinton against possible questions about her past support for NAFTA, her Wall Street ties, her relationship with Wal-Mart and her email controversy.

Alesha Smith and Pamela Sanders, both postal service employees, then set out from the session to knock on the doors of labor households in North College Hill.

Smith, a career letter carrier who rattled fences to check for dogs before walking into a stranger’s yard, registered four consecutive African-American voters on a single block. She handed out additional forms to one concerned black mother who discovered that her two formerly incarcerated sons had not yet registered.

“I don’t like either of them — one is a racist and insults women, and the other lies about her emails,” a white female voter told Smith.

Smith politely countered, offering her a contrast in issues before asking what bothered her more: racism or emails?

“You can defend her all you want,” the voter retorted. The canvassers let her go.

Later, when asked if conversations like those were frustrating and insulting, Smith sighed and shook her head.

“Do I get angry? I can’t get angry,” Smith said. “Did you hear what you just said? You don’t like him because of how he talks about women and he’s a racist. And the only thing you can compare Hillary to is the emails? Unbelievable. 2008, 2012, I had conversations like that. You just learn to deal with it.”

“The glass ceiling for women is real,” she added. “But I’m here for the purpose, not the power.”

Encounters like these ultimately served as motivation for the duo.

“The media is underestimating the black vote and how people feel about this election,” Sanders said. “But I don’t listen to the media. They like to hype people and think people don’t turn out. You’ll be a Trumper by the time they get finished! That’s why it’s so important for us to get out and educate people. TV will not educate you.”