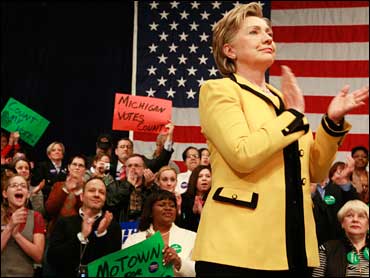 What is the proper word for the claim by Hillary Clinton and the more factually disinclined supporters of her campaign for the Democratic presidential nomination - made in speeches, briefings and interviews (including one by this reporter with the candidate) - that she has always been a critic of the North American Free Trade Agreement?

Now that we know from the 11,000 pages of Clinton White House documents released this week that former First Lady was an ardent advocate for NAFTA; now that we know she held at least five meetings to strategize about how to win congressional approval of the deal; now that we know she was in the thick of the manuevering to block the efforts of labor, farm, environmental and human rights groups to get a better agreement. Now that we know all of this, how should we assess the claim that Hillary's heart has always beaten to a fair-trade rhythm?

Now that we know from official records of her time as First Lady that Clinton was the featured speaker at a closed-door session where 120 women opinion leaders were hectored to pressure their congressional representatives to approve NAFTA; now that we know from ABC News reporting on the session that "her remarks were totally pro-NAFTA" and that "there was no equivocation for her support for NAFTA at the time;" now that we have these details confirmed, what should we make of Clinton's campaign claim that she was never comfortable with the militant free-trade agenda that has cost the United States hundreds of thousands of union jobs, that has idled entire industries, that has saddled this country with record trade deficits, undermined the security of working families in the US and abroad, and has forced Mexican farmers off their land into an economic refugee status that ultimately forces them to cross the Rio Grande River in search of work?

As she campaigns now, Clinton says, "I have been a critic of NAFTA from the very beginning."

But the White House records confirm that this is not true.

Her statement is, to be precise, a lie.

When it comes to the essential test of the trade debate, Clinton has been identified as a liar - a put-in-boldface-type "L-I-A-R" liar.

Those of us who covered the 1993 NAFTA debate have frequently expressed doubts about the former First Lady's recent statements. We never heard anything at the time about her dissenting from the Clinton Administration line on trade policy. And we knew that she had defended NAFTA in the years following its enactment. But fairness required that we at least entertain that notion - promoted by the lamentable David Gergen, himself a champion of free-trade policies while working in the Clinton White House - that Hillary Clinton had been a behind-the-scenes critic. We had to at least consider the possibility that, at the very least, Clinton had been worried that advancing NAFTA would trip up her advocacy for health care reform, that she had made her concerns known and that she had absented herself from pro-NAFTA lobbying.

This was certainly the impression that Clinton and her supporters sought to create as she campaigned in Wisconsin, Ohio, Pennsylvania and Indiana - states where worried workers want to know exactly where the candidates have stood and currently stand with regard to trade issues.

But that impression was a deliberate deception.

And we must all now recognize that when Hillary Clinton speaks about trade policy, she begins with a lie so blatant - that she's been "a critic of NAFTA from the very beginning" - that everything else she says must be viewed as suspect.
By John Nichols
Reprinted with permission from The Nation