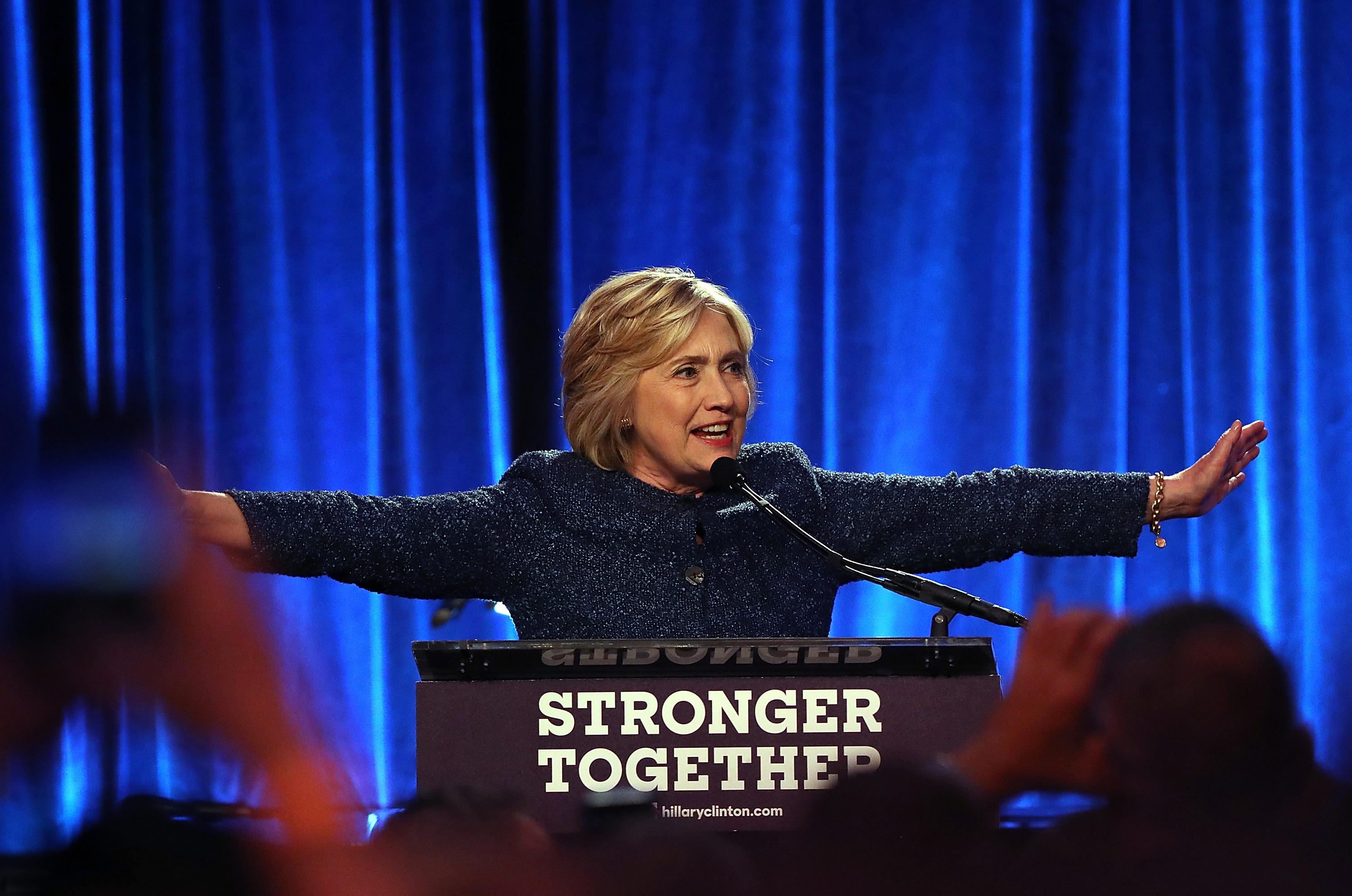 Hillary Clinton, speaking Friday at a big-ticket fundraiser in New York City, said half of Donald Trump’s supporters could be categorized into a “basket of deplorables,” implying that his backers hold “irredeemable” views on issues of race, gender and religion.

“To just be grossly generalist, you can put half of Trump supporters into what I call ‘the basket of deplorables,’” Clinton told donors gathered at a Manhattan restaurant. “Racist, sexist, homophobic, xenophobic, Islamophobic, you name it. And unfortunately, there are people like that, and he has lifted them up.”

“He has given voice to their websites that used to only have 11,000 people, now have 11 million,” she continued, referencing Trump’s campaign hire of Breitbart News’ Steve Bannon. “He tweets and retweets offensive, hateful, mean-spirited rhetoric.”

The Democratic nominee noted that “some of those folks -- they are irredeemable, but they are not America.”

Clinton, who was introduced by celebrities Laverne Cox and Barbra Streisand, went on to describe the “other basket.”

“The other basket, and I know because I look at this crowd, I see friends from all over America here…But that other basket of people are people who feel that government has let them down, the economy has let them down, nobody cares about them, nobody worries about what happens to their lives and their futures,” she said. “They are just desperate for change. Doesn’t really even matter where it comes from.”

In a statement Saturday afternoon, Clinton later walked back her estimate that “half” of Trump’s supporters were deplorable, saying it was “wrong.”

“Last night I was ‘grossly generalistic,’ and that’s never a good idea. I regret saying ‘half’ -- that was wrong,” she wrote. But she went on to list other “deplorable” developments in the Trump campaign, including his hiring of a “major advocate” for the alt-right, his attack on a federal judge for his Mexican heritage, and his criticisms of a Gold Star Muslim family.

“I won’t stop calling out bigotry and racist rhetoric in this campaign,” she promised.

Outrage spread on Twitter almost immediately after Clinton’s “basket of deplorables” line, which GOP pollster Frank Luntz noted was similar to the campaign-sinking “47 percent” comments made by Mitt Romney in 2012.

Trump even fired back at Clinton on the social media platform, blasting Clinton Saturday morning that she had been “SO INSULTING to my supporters.”

Later in the afternoon, Trump said he has “respect” for all of Clinton’s supporters, though they “will never vote for me”:

In a longer statement released after his tweets, Trump called Clinton’s remarks “the worst mistake of the political season.”

“[I]nstead of owning up to this grotesque attack on American voters, she tries to turn it around with a pathetic rehash of the words and insults used in her failing campaign?” Trump said. “For the first time in a long while, her true feelings came out, showing bigotry and hatred for millions of Americans.”

The Clinton campaign, for its part, has backed their candidate’s comments, saying that while Trump’s supporters don’t all fit into that category, several are part of the so-called alt-right “hate movement.”