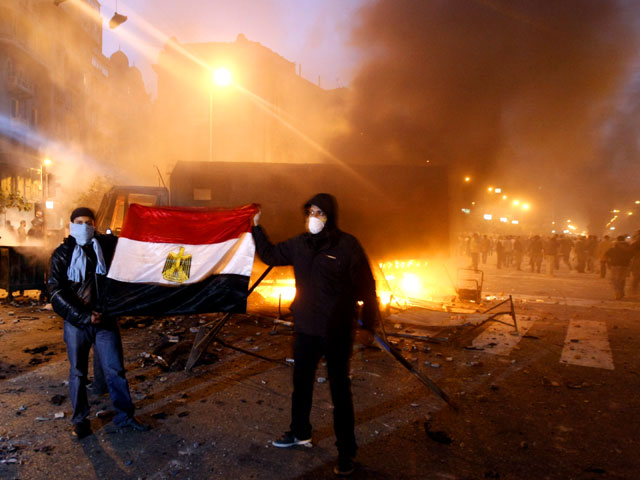 Secretary of State Hillary Clinton today urged the Egyptian government to scale back its violent crackdown against protesters -- but she maintained that the United States wishes to maintain its partnership with the Egyptian government. Protests erupted this week against the rule of the country's authoritarian and U.S.-allied president, Hosni Mubarak.

"We are deeply concerned about the use of violence by Egyptian police and security forces against protestors, and we call on the Egyptian government to do everything in its power to restrain security forces," Clinton said at a press conference today.

"At the same time, protesters should also refrain from violence and express themselves peacefully," she added.

Throngs of protesters in Cairo are defying a nighttime curfew Mubarak ordered earlier in the day in the face of angry protests against his 30-year rule. The Associated Press reports that Mubarak just extended the curfew nationwide - a sign that the government has been unable to impose its will on the masses. Protesters have reportedly stormed government buildings and fires have started in a number of cities.

Clinton said today that in order preserve Egypt's long-term stability, as well as the "progress and prosperity its people deserve," the Egyptian government must engage immediately with its citizens to implement economic, political and social reforms. She said that the United States has raised this issue with Egypt and other nations in the region repeatedly.

Still, she acknowledged that the Egyptian government has been a partner of the United States on a "range of issues." Bloomberg reports that Egypt is the fourth largest recipient of American aid after Afghanistan, Pakistan and Israel, based on the State Department's budget request for the current fiscal year. Egypt received more than $1.5 billion in aid from the U.S. last year.

The protesters were encouraged after pro-democracy advocate and Nobel Peace laureate Mohamed ElBaradei returned to the country Thursday night. He and other protesters were sprayed with water cannons during their Noon prayers, the AP reports, and some of ElBaradei's supporters were beaten with batons. ElBaradei himself has been placed under house arrest.

"These protests underscore that there are deep grievances within Egyptian society, and the Egyptian government needs to understand that violence will not make these grievances go away," Clinton said today.

She also urged Egyptian authorities "to reverse the unprecedented steps it has taken to cut off communications." Internet and cell phone services in the country have reportedly been shut off.

"The Egyptian government has a real opportunity in the face of this very clear demonstration of opposition to begin a process that will truly respond to the aspirations of the people of Egypt," Clinton said. "That moment needs to be seized, and we hope that it is."

President Obama assembled his national security team today for a 40-minute briefing on the situation in Egypt.

In an interview conducted on YouTube Thursday, Mr. Obama called Egypt "an ally of ours on a lot of critical issues," but added that people have the right "to express legitimate grievances."