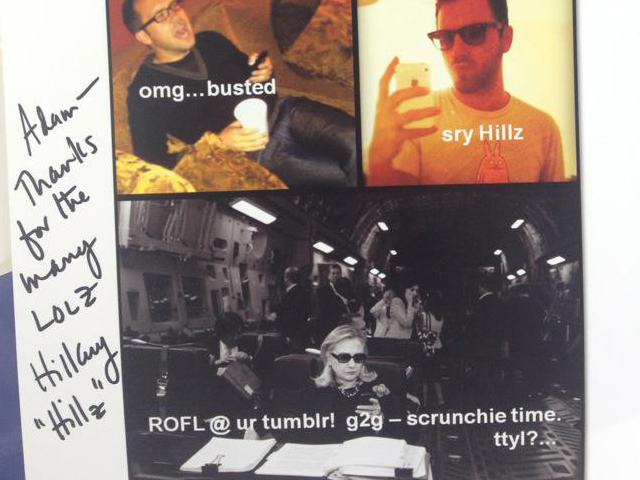 (CBS News) Secretary of State Hillary Clinton brings the LOLZ to new heights with an Internet meme that is making rounds.

The secretary of state was photographed Tuesday with publicists Stacy Lambe and Adam Smith, who created the Tumblr blog "Texts from Hillary." The blog launched last week and has been posting photo memes depicting Clinton texting politicians and celebrities like a boss.

The photos used in the meme was taken by Diana Walker for TIME and Reuters photographer Kevin Lamarque. Both pictures show a stern Clinton checking her Blackberry in sunglasses on a military plane bound for Tripoli from Malta.

According to the Associated Press, Clinton responded to "Texts from Hillary" by submitting her own meme to the site.

"Adam - Thanks for the many LOLZ," the secretary of state wrote signing the photo submission with "Hillary 'Hillz'"