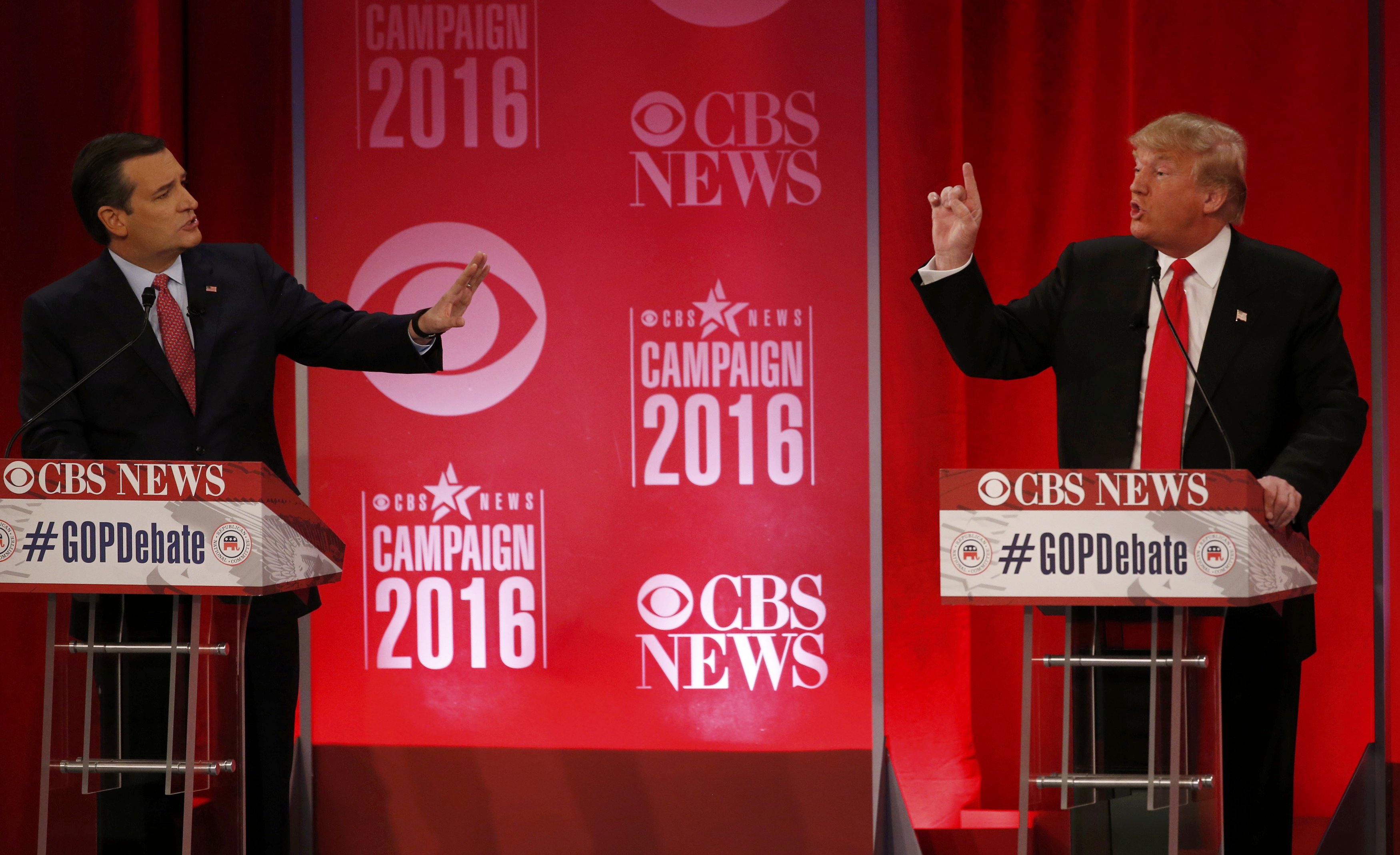 The Republican primary field may be less crowded, but it's certainly not quieter. Donald Trump gave his most venom-filled debate performance yet Saturday night in the CBS News GOP debate in Greenville, South Carolina. Yet the bombastic front runner wasn't the only Republican on the war path -- Jeb Bush, Ted Cruz and Marco Rubio were all ready to belittle their opponents, calling each other liars and liberals.

"I'm not going to vote for Ted Cruz," Trump declared at one point -- without clarifying whether he was referring to his vote in the primary contest or the general election. "This guy will say anything, nasty guy. Now I know why he doesn't have one endorsement from any of his colleagues. He's a nasty guy."

So far in the Republican primary, Trump has managed to stay perched above the rest of the GOP field in spite of his divisive remarks because voters find his frankness refreshing. But on Saturday night, Trump tested the boundaries of his appeal as a "truth teller." He repeatedly interrupted his fellow Republicans, and his inclination to resort to bitter attack lines made his opponents appear more presidential by contrast. His impatience with his opponents also betrayed the lack of policy details the front runner has laid out. When he did talk about policy, Trump at times sounded more like a Democrat than a Republican, and he unapologetically acknowledged he doesn't always see eye to eye with the GOP.

"I also feel I'm a common-sense conservative, because some of the views I don't agree with," Trump said. "And I think a lot of people agree with me, obviously, based on what's happening."

Many of Trump's sharpest jabs Saturday were reserved for Bush -- the Republican who's been most inclined to take on Trump in previous debates. After taking a dismal sixth place in the Iowa caucuses and fourth place in the New Hampshire primary, Bush's campaign may be on its last legs -- and Trump was intent on driving that message home.

When Bush responded by questioning Trump's foreign policy expertise, Trump simply retorted, "You spent $44 million in New Hampshire, give me a break."

Trump also at one point needled Bush for the way the former governor last year stumbled over questions about the Iraq war. "Obviously, the war in Iraq was a big, fat mistake," Trump said. "It took Jeb Bush, if you remember... it took him five days. He went back, it was a mistake, it wasn't a mistake. It took him five days before his people told him what to say, and he ultimately said, 'it was a mistake.'"

Trump went further than most Republicans would on the Iraq war, accusing the Bush administration of lying to the American people. "They lied. They said there were weapons of mass destruction, there were none. And they knew there were none," he said to boos from the audience.

Trump also unabashedly distanced himself from the GOP on Social Security, acknowledging that unlike other Republican candidates, he is promising to preserve it. "We're not going to hurt the people who have been paying into Social Security their whole life and then all of a sudden they're supposed to get less," he said.

"You know, flexibility is a good thing, but you shouldn't be flexible on core principles," Cruz said. "I like Donald, he is an amazing entertainer, but...for most of his life his policies have been very, very liberal. For most of his life, he has described himself as very pro- choice and as a supporter of partial birth abortion. Right now today as a candidate, he supports federal tax payer funding for Planned Parenthood."

That assertion prompted Trump to call Cruz the "single biggest liar" of the campaign. However, Cruz did get Trump to acknowledge that he believes Planned Parenthood "does do wonderful things, but not as it relates to abortion....There are wonderful things having to do with women's health."

Trump wasn't the only candidate calling Cruz a liar. After a well-worn argument over immigration reform, Sen. Marco Rubio let him have it.

"For a number of weeks now, Ted Cruz has just been telling lies," Rubio said. "He lied about Ben Carson in Iowa. He lies about Planned Parenthood. He lies about marriage. He's lying about all sorts of things. And now he makes things up."

In a surprising twist in the immigration debate, Cruz at one point challenged Rubio to explain in Spanish his position on President Obama's executive actions -- and Cruz himself put forward the challenge while speaking Spanish.

While Rubio engaged in some acrimonious exchanges with Cruz, he also thoughtfully explained some of his policy platforms, such as his proposal for expanding the Child Tax Credit.

"If a business takes their money and they invest in the piece of the equipment, they get to write to off their taxes. But if a parent takes money that they have earned to work and invests in their children, they don't? This makes no sense," he argued. "I'm going to have a tax plan that is pro-family because the family is the most important institution in society. You cannot have a strong country without strong families."

The many squabbles on stage also allowed Ohio Gov. John Kasich to press forward with his strategy of appealing to voters looking for a mature, positive leader. After Bush questioned Kasich's decision to expand Medicaid in Ohio -- in compliance with the Affordable Care Act -- Kasich defended his decision but ultimately suggested such attacks were undignified.

"Look, the bottom line is the people of this country, and this state, want to see everybody rise, and they want to see unity," he said. "And I don't want to get into all this fighting tonight because people are frankly sick of the negative campaigning."

For those worried that the acrimony of the GOP candidates may be too alienating for general election voters, Kasich offered an alternative choice.

"I think I'm a uniter, I think people sense it," he said, explaining his appeal among moderate Democrats. "I think they know I have the experience, and that I'm a man that can give people hope and a sense that they have the opportunity rise. And I'll tell you, I love these blue-collar Democrats, because they're going to vote for us come next fall, promise you that."