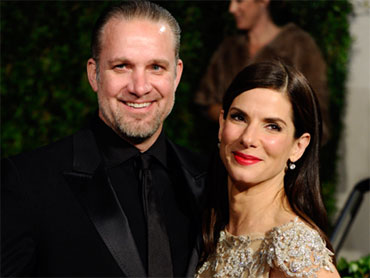 If 2010 made you feel like you wanted to hide in a closet and bury yourself under all the coats, then you were probably just trying to escape the storm of sleaze hurled this year by some of entertainment's finest - or maybe you were just the woman Charlie Sheen called for that infamous late-night hookup.

Either way, 2010 may have been Hollywood's nadir year: Mad Mel raged again; "Cheaters" could have done a whole celebrity season with plenty to spare for next year; and Kanye was ... well, Kanye. And when the most promising newcomer is a glamorous yet sassy young thing named Antoine Dodson whose song about his sister's rape made him a YouTube star, it's time to call it a day, hit the reset button and hope for a lot better in 2011.

DROPPING THE BOMB: Any chance that Jesse James had at forgiveness after he cheated on America's Sweetheart, Sandra Bullock, and ruined her Oscar glow were destroyed when we saw who he was cheating with - Michelle "Bombshell" McGee, better known as Ms. March in the "Tattooed Nazi" calendar. She kind of made us nostalgic for Tiger Woods' mistresses. Rachel Uchitel, where are you when we need you?

DIAMONDS ARE A GIRL'S BEST FRIEND: Even if they're a gift from a villainous dictator, apparently. Naomi Campbell was forced to testify at the war-crimes trial of former Liberian President Charles Taylor after it was revealed that he had given the temperamental model several raw diamonds as a gift after a party (because that's just what dictators do). After some questionable testimony, there seemed to be a chance that Campbell could be charged with perjury - but apparently a threat of a Blackberry to the head resulted in changing some minds.

SHE'S JUST BEING MILEY: And being Miley these days includes drinking, giving men lap dances, wearing barely there outfits and smoking on a bong. Can she please go back to being Hannah Montana again?

EQUAL OPPORTUNITY OFFENDER: He didn't get a Grammy nomination, but you'd better believe that Mel Gibson had the best recording of 2010 - with producer's credit going to ex-girlfriend and baby mama Oksana Grigorieva. Just when we were beginning to forget about his 2006 verbal rampage against Jews, women and gays, Gibson proved he had more hate to share, this time railing against blacks, Mexicans and Grigorieva in telephone calls so terrifying they would make Mad Max race out of the Thunderdome. Grigorieva also accused Gibson of punching her, but he flatly denied it - saying he only slapped her. FYI, Mel, that defense didn't work too well for Chris Brown ...

THERE'S A (KLAN) PARTY IN MY PANTS! John Mayer explained his exclusivity in dating those of the Caucasian persuasion by telling Playboy that while his heart was a Benetton ad, his genitalia were the spitting image of uber-racist David Duke. So THAT's what sent Jennifer Aniston and Taylor Swift running.

THE BLOOM IS OFF THE ROSE: Usually, it takes years of marriage for a couple to get to the point where they're sniping at each other, withholding sex, throwing around emotional abuse claims and getting into screaming matches. It only took one episode for Jake Pavelka and Vienna Girardi, who marked the end of their "Bachelor" courtship in spectacular fashion with the kind of blowup that usually ends with the pronouncement "You ARE the father!" on "Maury." Forget "The Bachelor"; "The Breakup" is WAY more entertaining.

NEXT TIME, TRY SINGING THE CEE LO SONG, LINDSAY: In one of the more ill-advised moves of her ill-advised life, Lindsay Lohan decided to get a manicure with the message "(Expletive) You" painted on her nails. Funny - if she wasn't heading to court on a probation violation. Perhaps another message would have been better: "Plea bargain."

MAYBE TEEN MOM NEEDS TO ADD A DANCING COMPONENT: Even though Bristol Palin proved she was part of the Rhythmless Nation on "Dancing With the Stars," Americans still fell in love with her, keeping her on the show and casting aside other more worthy opponents such as Brandy. Some credited Tea Party supporters for all the Palin love, but maybe it was the gun Mama Palin was packing that got all those people voting. Just kidding ... we think.

IF A SINGER STRIPS NAKED IN DALLAS AND NO ONE NOTICES, DID IT REALLY HAPPEN? OK, so, some people - namely Dallas police - did take notice when Erykah Badu got naked at the site of JFK's assassination for her video "Window Seat." But the people she wanted to pay attention - people who actually buy music - ignored her artistic statement, and her album.

WITH "FRIENDS" LIKE THESE: Courteney Cox probably wanted to turn into a real-life cougar and rip estranged hubby David Arquette to shreds after he dished about their breakup to Howard Stern on what seemed like a regular weekly appearance, oversharing a little bit more each time. For the record, Arquette said: They had stopped having sex; he cried the first time he had sex with another woman; he thinks Courtney may be getting some from somewhere else; and he started drinking. We figure that last nugget must have started a long time ago.

MOST UNNECESSARY TWEET OF THE YEAR: Ricky Martin's announcement that he is, indeed, a gay man. Livin' La Vida-Duh!!!

FYI GEORGE, KANYE HAS PROVIDED FAR WORSE MOMENTS: Besides hurting W's feelings, Kanye West had plenty of obnoxious moments in 2010, including berating Taylor Swift for not standing up for him after he dissed her last year (huh?), tangling with Matt Lauer on "Today" and that unfortunate Macy's Thanksgiving Day parade appearance (but we'll blame Macy's for that one). Still, you can't be too mad at a guy who not only acknowledges his boorish behavior, but also revels in it like on the song "Runaway."