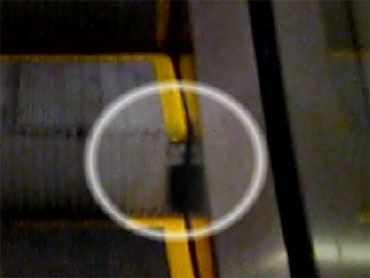 Experts say escalators should be inspected for safety twice a year, but in many cases that's not happening.

In a hidden camera investigation, "Early Show" Consumer Correspondent Susan Koeppen and her team went out with an escalator inspector and found some escalators that she called "a disaster waiting to happen."
The disaster did happen for 6-year-old Madeline Dahm, who was just a toddler when her foot was pulled into the side of an escalator.

Madeline was with her dad, Jason Dahm, when suddenly her foot was sucked into the space between the step and the side panel.

Jason said, "I felt a tug at my arm, at which point Madeline screamed and I quickly looked down and I saw what was left of her shoe."

Madeline's sandal was shredded, four of her toes were crushed and the tendons along the top her foot were severed.

Suzanne Dahm, Madeline's mother, told CBS News, "It was horrible. I mean her foot was so bad. It was so bad."

Doctors managed to save her foot, but she still faces more surgery. Her family now avoids using escalators.

Suzanne said, "It's not a toy. It's a serious piece of equipment, and it has no feelings. It's cold, it's metal. It will suck you in."

Jason added, "I never thought in a million years it would happen. And it did."

The Consumer Product Safety Commission estimates in 2008 11,000 people were injured and treated in emergency rooms because of escalator-related accidents. Nearly a quarter of those injured were children.

Doherty said accidents can be "devastating."

He said, "Human flesh stands no chance against a moving escalator."

There are no federal regulations mandating escalators be inspected. It's left to states, towns and local municipalities.

Doherty said he believes escalators are "absolutely not" being checked enough.

Koeppen asked the inspector, "What could happen to somebody if they got caught in that hole that we saw?"

He replied, "That opening is big enough to fit a child's arm inside of it. It'd take his arm right off at the elbow. I can't emphasize how severe and how dangerous that condition is."

Another escalator Koeppen's team found had a side panel that was barely hanging on.

Doherty said, "You could pull it out and actually see the chain moving that's driving the escalator while you're on it."

One of the biggest hazards on an escalator, according to Doherty, is where the moving steps meet the side. Doherty says if you can fit more than the tip of a pencil in that space, then the gap is too big. On the escalator in the movie theater Koeppen's team filmed, a pencil was sucked into the space

Doherty says the spots that have enough room for a pencil to go, have enough space for disaster to strike if a shoelace made its way in.

Koeppen added on "The Early Show" that her team informed the manager at the movie theater about the safety hazards on the escalators. When they stopped by a week later the escalators were still in operation. "The Early Show" called the corporate headquarters to report the problem, and they've now been fixed. Doherty says those escalators should have been shut down immediately the first day.