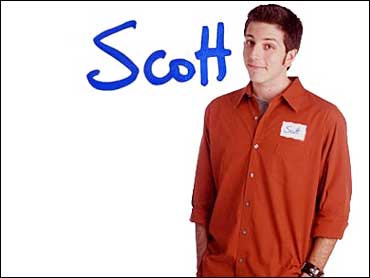 You've heard the expression: "Wearing your heart on your sleeve." But one man has gone one step further.

Scott Ginsberg has been wearing his name on his chest, literally. For over 900 days, he has worn a nametag that says, "Scott." Ginsberg says it is a way of opening himself up to strangers he meets, while becoming a conversation machine.

He told The Early Show Wednesday that the nametag forces him to be a happier and a more approachable person, and his tag often makes others friendlier too. According to Ginsberg, his nametag allows him to meet new people almost every day.

Ginsberg says, as of Wednesday, he has worn the nametag for 910 days. However, these have not been consecutive days. He took off the tag for a time to see what life would be like without it.

The idea to wear the nametag everywhere came by accident. It started when Ginsberg and a friend attended a seminar on the campus at the University of Miami. Everyone had to wear a nametag, and after the seminar, the two kept the tag on when they went out that night. It turned out that people they ran into were really friendly and wanted to communicate, so Ginsberg decided to keep it on for a while.

Soon the tag became a part of his daily wear. Ginsberg says the tag is like a front porch, which is a mechanism for approachability because it makes people feel comfortable and willing to communicate.

Wearing a nametag will help others open up to strangers, according to Ginsberg, because they may have a conversation with someone that they might not otherwise have had. But, he says a nametag should only be worn by certain people. He discourages young children and single women to wear nametags because it makes them vulnerable to dangers, such as child abduction or kidnapping.

There are also other drawbacks of wearing nametags everywhere. Ginsberg says he is an easier target for the homeless searching for money because they can make a personal case to him because they know his name. And, Ginsberg says, he no longer has anonymity.

In general, Ginsberg says people should not have to rely on a nametag to meet new people. He recommends saying hello to strangers as an act of acknowledgment and friendliness.