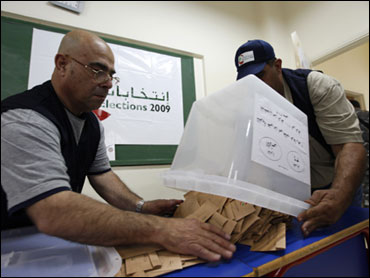 Final election results released by the Lebanese government show that pro-Western factions defeated Hezbollah and its allies in the tight race and will retain a majority in parliament.

The election was an early test of President Barack Obama's efforts to forge Middle East peace. A win by the militant Hezbollah group and its allies would have boosted the influence of its backers Iran and Syria and risked pushing one of the region's most unsettled countries into international isolation - and possibly into more conflict with Israel.

Interior Minister Ziad Baroud read the returns from all 26 districts Monday. His count had the pro-Western bloc winning 68 seats of the 128-member legislature in Sunday's balloting and the Hezbollah-led alliance 57 seats. Three seats went to independents.

Even before the results were officially announced, the winners celebrated by setting off fireworks and driving around in honking motorcades.

"I present this victory to Lebanon," Prime Minister Fuad Saniora said on television after stations projected his pro-Western coalition was winning. "It is an exceptional day for democracy in Lebanon."

OTV, the television station of one of Hezbollah's key Christian allies, former army chief Michel Aoun, conceded that the party's candidates who challenged pro-Western competitors in several Christian districts had been defeated, preventing a victory for the Hezbollah-led coalition.

The leader of the largest bloc in the pro-Western coalition, Saad Hariri, said early Monday in a televised speech that he extends his hand to the losing side.

President Michel Suleiman set the political tone for the post-election period when he expressed hope for a national unity government, a prospect both sides have already raised.

But despite the conciliatory tone from the winners, the results raise questions about whether Lebanon will be able to avoid the kind of political gridlock and crisis that have buffeted the country for most of the last four years.

Hezbollah had veto power in Saniora's Cabinet for the last year, which it won after provoking the worst street clashes since the 1975-1990 civil war. The pro-Western coalition had vowed not to give Hezbollah and its allies a blocking minority in the new government if they won.

The race for the parliament is the first major Mideast event since President Obama reached out to the Arab and Islamic worlds last week in his speech in Cairo in which he called for a "new beginning between the United States and Muslims." Mr. Obama challenged Muslims to confront violent extremism across the globe and urged Israel and the Palestinians along with Arab states to find common ground on which to forge peace.

Hezbollah, which the U.S. considers a terrorist organization, has been one of the staunchest opponents of U.S. policy in the Middle East. It fought the Jewish state in southern Lebanon in 2006 in a devastating war.

The U.S. had warned that it could reconsider aid depending on whether Hezbollah and allies won. The U.S. has given around $1 billion to Lebanon's pro-Western government since 2006.

Israel appeared to be happy with the results.

Lawmaker Tzahi Hanegbi, who heads the parliamentary committee in charge of foreign affairs and defense, said the initial indications from Lebanon were positive. "We can say that after many years in which the leading trend in the Middle East was the clear strengthening of the radical camp, the camp that puts Israel and the U.S. in its crosshairs, then yesterday might have been a reversal of the trend," he told Army Radio.

The battle in Christian districts was the decisive factor. Lebanese generally vote along sectarian and family loyalties, with seats for Sunnis and Shiites in the half-Christian, half-Muslim, 128-member parliament already locked up even before the voting started.

Christians in the pro-Western coalition warned that the heavily armed Hezbollah would bring the influence of Shiite Iran to Lebanon. The Maronite Catholic Church made a last-minute appeal, warning that Lebanon as a state and its Arab identity were threatened, a clear reference to Hezbollah and its Persian backer, Iran.

Sunnis were also driven to vote for the pro-Western coalition to get back at Shiite Hezbollah gunmen for seizing the streets a year ago in Beirut from pro-government supporters.

Turnout nationwide was about 52.3 percent, said the government, an increase over the 2005 figure of 45.8 percent.