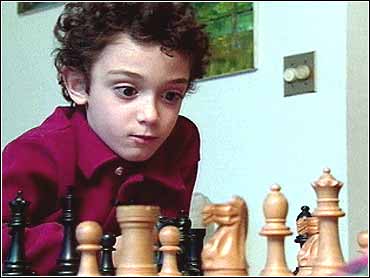 He may be only 8 years old, but this boy from Brooklyn is the country's best chess player under age 11.

He's so good, reports The Saturday Early Show anchor Russ Mitchell, that some even claim he could be the next Bobby Fisher.

While other kids his age take music lessons or play soccer after school, Fabiano Caruana, the top-ranked child chess player under 11 in the country, comes home from school three afternoons a week to play chess.

"You see a talented youngster similar to Fabiano every couple of years," said Fabiano's coach Bruce Pandolfini, the chess master who was portrayed by Academy Award-winner Ben Kingsley in the movie Searching for Bobby Fisher. "We're never sure how far they're going to go. They have to survive all of the losses they're going to encounter, these young people. They're going to lose a lot of games.

"And Fabiano's very tough. He's mentally quite tough and that's an attribute. You need that. It's not a game for - for the tender-hearted."

According to Pandolfini most prodigies are produced in three areas: music, math and chess. Few are born with Fabiano's talent for purely intuitive activities. "If he stays with it and continues to develop in the way he has been, no reason he couldn't go all the way, become world champion someday," said Pandolfini.

The Caruanas discovered Fabiano's gift when he had difficulty in first grade. Ironically, he just couldn't sit still. "And I heard that they had a chess club at Berkeley-Carroll. So I asked - I told my husband, maybe we should sign and see if maybe he likes the game," recalled Fabiano's mothe,r Santina Caruana. "My husband said, 'are you kidding? He can never play chess.' And I said let's do it for just one time.... We're not going to lose anything. He agreed."

Louis Caruana realized quickly that his son was a natural. "The first month, I could beat him. The second month, it was almost about even and the third month, he had overtaken me," he said. Fabiano was only 6 at the time.

"Fabiano could become the youngest U.S. chess master ever," said Larry Temarkin, manager of the world famous Marshall Chess Club in Manhattan - an old haunt of Bobby Fisher's. "Asuka Nakamura set that record at the age of 10 years, 3 months in 1998. Fabiano could smash that by age 9 and a half."

Temarkin said Fabiano's talent is the most remarkable he's seen in years: "He has the talent potential to be the greatest chess player since Bobby Fisher himself, and to become the world chess champion."

But success doesn't come without a price. The Caruanas spend $25,000 a year to ensure Fabiano's formidable presence at natinal tournaments.

Fabiano recently attended the National Scholastic Chess Championships in Orlando, Fla. As the top third-grader, he was the one to beat.

"It's a nervous feeling," explained Fabiano's father. "All parents are nervous if they have expectations; they're on edge waiting for the verdict."

Fabiano only lost one round on his second day but finished the tournament in 16th place, mirroring the early career of Bobby Fisher.

Regardless, he's got a bright future ahead of him as a chess player.

And his mother believes his talent can transfer into other areas.

"I think chess is a ...game of mind-critical thinking. I mean, that will benefit him by applying the same strategy or so in a normal life," she said. "And chess is a good game that can teach that."