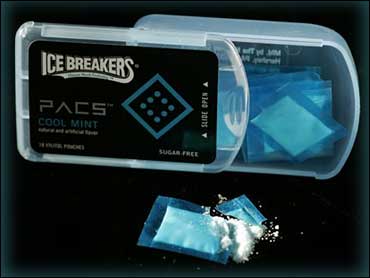 The Hershey Co. is stopping production of Ice Breakers Pacs in response to criticism that the mints look too much like illegal street drugs, the company's president and chief executive officer said Thursday.

Ice Breakers Pacs, which first hit store shelves in November, are small dissolvable pouches with a powdered sweetener inside. The pouches come in blue or orange and bear the Ice Breakers logo.

Members of Philadelphia's police narcotics squad said the mints closely resemble tiny heat-sealed bags used to sell powdered street drugs. They said the consequences could be serious if, for example, a child familiar with the mints found a package of cocaine.

"Some community and law-enforcement leaders have expressed concern" about the shape of pouch and the Xylitol sweetener inside, and about the possibility of the mints being mistaken for illegal substances, West said.

"We are sensitive to these viewpoints and thus have made the decision that we will no longer manufacture Ice Breakers Pacs," he said.

Ice Breakers Pacs remain on store shelves but are expected to be sold out early this year and no more are being made, West said. Kirk Saville, a company spokesman, said they had been distributed across the United States on a limited basis.

Hershey has said the mints were not intended to resemble anything.