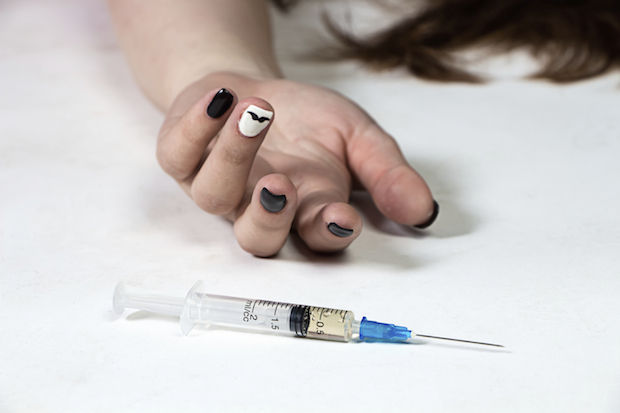 The face of heroin addiction in the United States is changing, as well-off abusers of prescription painkillers switch to illicit narcotics to feed their habit, federal officials reported Tuesday.

The findings were published in the July 7 issue of the CDC's Morbidity and Mortality Weekly Report.

CDC Director Dr. Tom Frieden said heroin use is increasing at an alarming rate in many parts of society. And the problem is being driven by both the prescription opioid epidemic and cheaper, more available heroin, he said.

"It's really a one-two punch," Frieden said during a media briefing. "Those two factors are driving the increase, and will drive the strategies we need to pursue to turn this around."

The people most at risk for heroin addiction include whites, males, 18- to 25-year-olds, people making less than $20,000 a year, Medicaid recipients and the uninsured, the CDC report found.

But the biggest increases in heroin use in recent years were found in groups that typically aren't expected to go near the drug, including women, people with private insurance and higher-income individuals, the report said.

The gaps in heroin use between men and women, people on Medicaid or with private insurance, and those with low or high incomes have all narrowed during the past decade, the CDC said.

Frieden said the narrowing gaps in heroin abuse are occurring due to across-the-board increases, causing a "leveling" of heroin use. "We're seeing an increase throughout many segments of society," he added.

This expansion of heroin abuse can be largely chalked up to an earlier wave of prescription opioid drug abuse -- including such drugs as Vicodin, OxyContin and Percocet -- and government efforts to counter that trend, said Brad Lander, an addiction medicine specialist at the Ohio State University Wexner Medical Center.

The CDC's new report bears this out. About 45 percent of people who used heroin also were addicted to prescription narcotics from 2011 to 2013, researchers found. That's more than double the rate from 2002 to 2004, the report revealed.

Prescription drug abuse is "the strongest risk factor for heroin abuse or dependence," Frieden said, adding that prescription narcotics are "essentially the same chemical, with the same effect on the brain" as heroin.

Nearly all people who reported heroin use also reported using at least one other drug in the past year, and nearly two-thirds had used at least three other drugs, the CDC reported.

Lander, who has been treating addiction for three decades, sees the heroin boom as the latest in a series of waves of drug abuse that regularly sweep across the United States.

"These things go in cycles," he said. "I really think it's just going to run its course. I think as people see how dangerous this is, it will disappear over time -- at least, that's what I've seen in my experience."

In the meantime, addiction treatment -- rather than law enforcement or new legislation -- will be the best way to minimize the harm from heroin abuse, Lander said.

"We do have the ability to deal with it on a treatment level," he said. "We have the medications and we have the know-how. We just don't have the resources. But I think we could deal with this pretty effectively."

CDC officials agreed that states also can play a leading role in reversing the heroin epidemic, by increasing access to substance-abuse treatment services. The CDC urged states to make prescription-monitoring programs easier for doctors and pharmacists to use. States also should review their Medicaid and workers' compensation programs to identify trends of inappropriate prescribing, the CDC said.

In addition, the federal government is working on prescribing guidelines for treating chronic pain that are expected to help limit prescription abuse, Frieden said. In the meantime, regulators are urging doctors to be more judicious in prescribing addictive drugs for pain management.