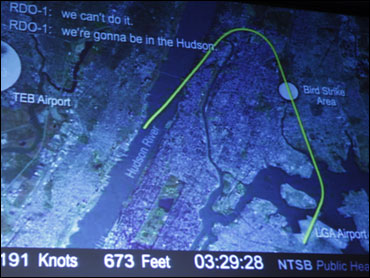 On takeoff, the pilot of Flight 1549 remarked on two things almost immediately: a breathtaking view of the Hudson River and the sickening thump of birds hitting his engines. Warnings about the birds probably would not have helped, Capt. Chesley Sullenberger told federal safety officials Tuesday as they looked for ways to prevent a recurrence that could prove deadly.

"In my experience, the warnings we get are general in nature and not specific and therefore have limited usefulness," Sullenberger said during a hearing by the National Transportation Safety Board.

The board began three days of hearings into safety issues arising from the Jan. 15 accident, including efforts to prevent bird strikes and the ability of aircraft engines to withstand collisions with large birds. Other issues include whether the Federal Aviation Administration's aircraft certification standards are adequate to protect passengers in event of a forced water landing.

In the case of US Airways Flight 1549, the Airbus A320 suffered a rupture near the tailcone that sent water gushing into the cabin after its forced landing on the Hudson River. All 155 aboard managed to escape the sinking craft.

A cockpit voice recorder transcript released by the board showed Sullenberger and co-pilot Jeffrey Skiles were admiring their surroundings less than a minute before their plane struck a flock of Canada geese and lost thrust in both engines.

"This is the captain, brace for impact": Transcript Of Cockpit Voice Recording From USAir Flight 1549 (pdf)

"What a view of the Hudson today," Sullenberger remarked.

Thirty-three seconds later Sullenberger said, "Birds," Skiles said, "Whoa," and there is the sound of thumping.

Sullenberger credited his 40 years of experience for his calm demeanor in the cockpit, reports CBS News correspondent Nancy Cordes.

"I think that it allowed me to focus clearly on the highest priorities at every stage of the flight without having to constantly refer to written guidance," he said.

The pilots in the deadly Colgan Air crash in Buffalo in February had significantly less experience and the captain had failed five flight tests, reports Cordes. That led the FAA today to order its inspectors to immediately focus on training programs at regional airlines like Colgan.

Meanwhile, US Airways Flight 1549 passenger Billy Campbell, a Woodland Hills, Calif., businessman who was in a window seat in the second-to-last row, said the engine he could see out his window after the bird strike was a "bonfire."

Sullenberger told the board that he didn't attempt to return to New York's LaGuardia Airport because he thought, "I cannot afford to be wrong."

"I had to make sure I could make it before I chose that option," he said. Instead of risking a crash in a densely populated area, he glided the plane into the river.

The Airbus A320 had climbed to about 900 meters when the plane hit a flock of Canada geese and lost thrust in both engines.

Campbell testified that water came flooding in his window when the plane hit the river. Someone also cracked open a rear door.

"My concern was that the plane was going to sink and we were going to be stuck in the back," he said.

In recent decades, many bird populations - including Canada geese - have rebounded thanks partly to environmental regulations. Air travel has also soared since deregulation in the late 1970s encouraged greater competition and lower fares.

Board member Robert Sumwalt, a former US Airways pilot who flew A320s, said he "never really worried about birds bringing my airplane down."

"Now this has caused a whole new focus on this," Sumwalt said in an interview.

With more planes and more birds in the sky, "we have a situation here - almost a numbers game - where eventually something is going to happen," Michael Begier, national coordinator of the Agriculture Department's airport wildlife hazards program, said in an interview. "We're very fortunate that Flight 1549 was not a catastrophe. It is a warning shot."

The FAA is testing bird-detecting radar that might help airports manage nearby bird populations. Some experts have also suggested aircraft engines should be designed to withstand bigger birds. Newer engines on commercial airliners have to withstand an 8-pound bird, but Canada geese can weigh twice that.

Disrupting bird habitats close to airports would probably not have helped Flight 1549. An analysis of remains of Canada geese in the plane's engines showed that they were migratory - perhaps from Labrador, Canada - not part of the Canada geese population that lives year-round in the New York area, according to the National Zoo's Migratory Bird Center. Moreover, the plane-geese collision occurred several miles from the airport.

Sumwalt told the hearing that he regrets saying that he expected Campbell to testify that the rear door of Flight 1549 was opened by flight attendant Doreen Welsh, who was seated near it. In fact, Campbell did not testify that Welsh had opened the door and instead called her "courageous."

Welsh has said in interviews and congressional testimony that a passenger pushed past her and opened the door, but no passenger has been identified.