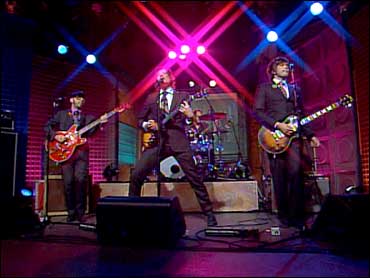 The pop/rock band OK Go danced their way into the lives of millions of fans last year through their hilarious video, "A Million Ways," which featured band members dancing in their backyard. It ranks as the most downloaded video in music history.

So it comes as no surprise that their infectious follow-up, "Here It Goes Again," featuring the foursome's sensational dance moves synchronized on treadmills, has become the most-played video on MTV and VH1, and is the No. 1 video on iTunes in the United States, all thanks to the video's initial posting on YouTube.

On The Early Show Thursday, lead singer Damian Kulash told Harry Smith "A Million Ways" only cost the band $5 to make – the cost of the videotape! And fans have now submitted more than 200 of their own versions of the song.

"Here It Goes Again" took 17 takes, said Kulash, who added that his sister choreographed it. And it resulted in "one long string of injures," he kidded.

OK GO performed "Here It Goes Again" for audience members, but without the treadmills.

To see the performance, .