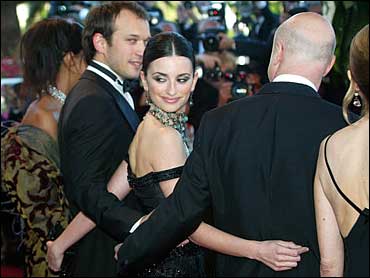 France's most vaunted cinematic tradition got off to a slow start Wednesday because of another national tradition - the strike.

A day before the Cannes Film Festival started, France's air traffic controllers and other state employees stayed off the job in a protest over retirement benefits.

With flights disrupted, some Cannes-goers opted to drive in overnight from other European cities. Many spent opening day dozing off. Others flew in late and were struggling to hit the ground running.

Ann-ann Ming of Taiwan's national film department said she waited in a Rome airport for 10 hours to get a connecting flight to the Riviera.

"We spent 10 hours sleeping. Doing nothing. We were afraid to walk around because we thought we might lose our seats," she said.

A beauty queen. A truck driver. A wunderkind.

Cannes' nine-member jury is a diverse group: Many of them had other lives before they got interested in cinema.

Indian actress Aishwarya Rai studied architecture before she became a model. The green-eyed beauty was elected Miss World in 1994, and since then she's become one of the biggest - and most prolific - stars in Bollywood, Bombay's film industry. She shot seven movies since coming to Cannes last year with the musical "Devdas."

Italian writer Erri de Luca has been a truck driver, a construction worker and a leftist activist. He has also translated four books of the Old Testament from Hebrew.

Another jury member, director Steven Soderbergh, came to Cannes as a 26-year-old unknown. He became famous overnight after "sex, lies and videotape" won the top prize in 1989. Since then he's made "Traffic," "Ocean's Eleven" and "Erin Brockovich."

"I think you could make the case that I was created by Cannes," he said.


For 12 days, Cannes jury members lead a life of opulence, staying in top-notch hotels and posing for paparazzi as they glide up the red carpet into premieres.

Jury member Meg Ryan reminisced about her first trip to Cannes, which was far from glamorous. The "When Harry Met Sally" star came to town at 17 with a backpack, a Eurail train pass and two friends.

"We slept on the beach," she said.

After conquering Spain and the United States, Penelope Cruz has turned her sights to France.

For her role in the French swashbuckling movie "Fanfan la Tulipe," the Spanish actress dredged up memories from French classes, hired a dialect coach and learned dialogue phonetically.

Cruz said she would never have agreed to make the movie if her voice was dubbed over: "That was my main condition."

Her Spanish accent gives her character an exotic, gypsy-like air, but at times, she seems to struggle with her lines. The film is set in 18th century France, and some of the language is archaic and flowery.

Cruz plays a palm-reader who wins the heart of a skirt-chasing soldier of fortune, played by Vincent Perez, who starred in "Indochine." They played brother and sister in 1998's "Talk of Angels." Now they're old friends.
Written by Angela Doland