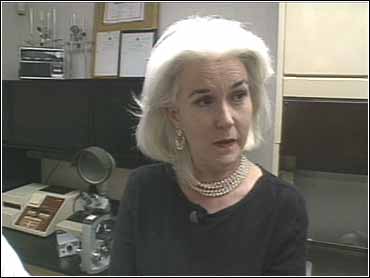 In Heloise's world, a shower cap is not made just for a shower.

For example, a grilled cheese sandwich is not made just on a grill. (Just put an iron on top. And don't press too hard.)

And her offbeat suggestions aren't made just for a few. Millions of people follow them because they are hints from Heloise.

Heloise is the grand dame of common sense, who presides over a tidy empire built on practical suggestions and money saving tips. For 23 years, she has been an internationally syndicated columnist published in 500 papers, and an author of nine books, as Correspondent Richard Schlesinger reports.

"Is there any way to get the yellow armpit stains out of white shirts?" one caller asks.

"You can try sponging the area with full strength household vinegar," she replies.

Vinegar is actually her No. 1 solution. She recommends it at least once a week for all sorts of things, like cleaning drains.

Many of her suggestions are hand-me-down hints from her mother, who was the original Heloise. She launched what would become the family hint business in 1959.

"We were stationed in Hawaii," recalls the daughter. "My father was a lieutenant colonel in the Air Force."

"My mother was the first one to admit that she didn't know how to keep house," she adds.

The first Heloise figured out a way to help herself and all the other military wives fight those endless battles around the house. She started a column in the Honolulu newspaper. Housewives sent in tips about cooking and cleaning. In 1959 there weren't many women in the newspaper business but this column was a huge success immediately.

Eventually, the daughter (who graduated college in 1974) followed in her mother's footsteps. "I worked with Mother full time," she recalls.

At the time her name wasn't even Heloise. Her parents named her Ponce when she was born. She became Heloise in 1977, when her mother died and young Ponce decided to take over the column.

She's taken her name, her job. She's sort of become her mother's persona. Does she thinshe's still her own person?

"Oh absolutely," says the new Heloise. "It was important for the transition of the column to have consistency....And then, after three years I thought, you know, if I'm going to do this for the rest of my life and be happy, I've got to make it my own."

Today's Heloise has tried to expand her column.

But her bread and butter is still stains and odors.

"Eighty percent of the questions that come in are stain and odors," she says.

There's hardly an odor she can't get rid of but there is one stain, that's resisted her efforts for about 10 years.

"There's a stain on my carpet I can't get out and I'm Heloise. But I'm not going to tell you where it is in the household," she confesses.

"I am not perfect; I don't expect you to be perfect," she tells Schlesinger.

People expect her to be perfect.

"They shouldn't," she says. "I mean life is too short...to obsess about everything being perfect. It's not practical."

And Heloise is nothing if not practical.

"You can't go in there!" she tells Schlesinger and then runs to the pantry.

"Cause I haven't been home and it's a mess," she explains.

Her house - as one might expect - is practically spotless.

But there is that secret stain.

"Everyone should have one or two secrets in their lives. And that is going to be mine," she says.

Heloise is 49 and married to a plumbing contractor. She works with her staff of five at her San Antonio home, opening 2,000 to 3,000 letters and emails each week and testing hints all over her house.

She may have all the hints. But she doesn't have all the answers. There's one question she's been pondering for years: Can vinegar kill mold, or even better, bacteria?

"If in fact, plain old 5 percent household vinegar would kill certain germs or mold or mildew in...your kitchen or bath, it would be fabulous," she theorizes.

48 Hours took the hint from Heloise and tried to find out for her, asking Good Housekeeping to find out if vinegar kills mold and germs.

"We put the mold into the grout of the tiles," says Gina Marino, Good Housekeeping's microbiologist.

This mold and bacteria had to grow for a few days.

And when it was time for results of the experiment, vinegar's greatest booster flew in to hear the answer to her question.

"Well, with mold, it's sort of effective," Marino says. "It reduced it by 90 percent actually."

But what was really exciting for Heloise is how well vinegar worked against bacteria.

It was 99.9 percent effective.

Is this the birth of a hint? "Yes," she says announcing her intention to write bout it.

What will she say?

Vinegar is once again No. 1 on Heloise's Hint Parade.