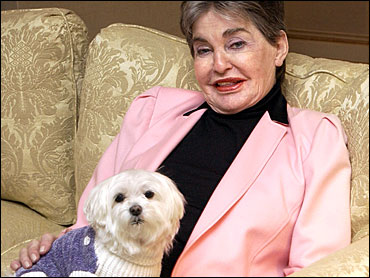 A judge has ruled that the multibillion-dollar fortune that late-real estate baroness Leona Helmsley purportedly wanted donated exclusively for the care of dogs can be used for other charitable purposes as well.

Trustees managing the fortune of the 87-year-old Helmsley's estate since she died in 2007 sought a surrogate court ruling to determine whether Helmsley had intended to donate her entire fortune to dog-related charities or not.

Animal rights groups had rejoiced a year ago at public reports that Helmsley, sometimes called "The Queen of Mean" for the imperious way she treated her staff, had wanted her entire fortune to be donated to care for dogs.

But Manhattan Surrogate Judge Troy Webber's Feb. 19 ruling found that the legal documents left by Helmsley allowed the trustees to "apply trust funds for such charitable purposes and in such amounts as they may, in their sole discretion, determine."

The hotel queen's will named her own dog, Trouble, as a beneficiary, while explicitly leaving out two of her grandchildren. But the Maltese isn't quite as well-heeled as she used to be. In April, a Manhattan judge reduced the trust fund for the 9-year-old pooch from $12 million to $2 million.

Howard Rubenstein, spokesman for the trustees, said Wednesday that the fund would announce initial grants next month.

"In the hope that this would be the court's decision, the trustees have been diligently working to identify potential grantees so the trust's funds would be put to optimal use as soon as possible in such areas a health care, medical research, human services, education and various other areas," he said.

Rubenstein did not say whether dog-related charities would be guaranteed recipients of the trust.

The Humane Society of the United States said it hoped Helmsley's estate still would benefit such causes as combatting dogfighting and puppy mills.

"Her fortune has the potential to do so much good for the animals many consider to be our closest friends and companions," society President Wayne Pacelle said in a statement.

Helmsley's fortune had been estimated at $5 billion to $8 billion after her death. Rubenstein said much of the holdings are real estate entities with changing values in today's economy, and an exact figure wasn't available.