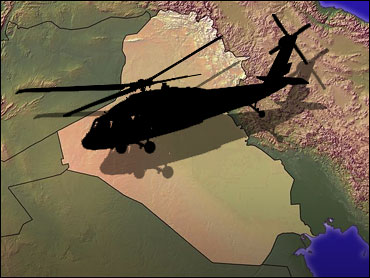 A helicopter went down in northern Iraq on Wednesday, killing all 14 U.S. soldiers aboard, the military said, the deadliest crash since January 2005.

CBS News has learned that almost 800 yards into the flight, a tail rotor malfunctioned. The pilot called it in but before he could react, the helicopter went into an uncontrollable spin and crashed in rough terrain, killing all 14 on board, reports CBS News chief foreign correspondent Lara Logan.

The military said initial indications showed the aircraft experienced a mechanical problem and was not brought down by hostile fire, but the cause of the crash was still under investigation.

The UH-60 Black Hawk was part of a pair of helicopters on a nighttime operation when the crash occurred. The four crew members and 10 passengers who perished were assigned to Task Force Lightning, the military said. It did not release identities pending notification of relatives.

The U.S. military relies heavily on helicopters to avoid the threat of ambushes and roadside bombs — the deadliest weapon in the militants' arsenal — and dozens have crashed in accidents or been shot down.

The Army's deputy director for aviation says that he has more than 400 helicopters of all kinds operating in Iraq – more than any time during the war. Their main mission, says one Brigade commander is to carry troops in and out of battle, reports CBS News national security correspondent David Martin.

Helicopters remain the safest way to travel in Iraq, with roadside bombs and ambushes forcing U.S. troops into the skies.

"The ability to move combat force at 100 knots versus 20 miles an hour on the ground is an element of speed which is critical in combat," says Col. Robert Quackenbush of the Army Aviation Directorate, reports Martin.

The deadliest crash occurred on Jan. 26, 2005, when a CH-53 Sea Stallion transport helicopter went down in a sandstorm in western Iraq, killing 31 U.S. troops.

Wednesday's deaths rose to at least 3,721 members of the U.S. military who have died since the Iraq war started in March 2003, according to an Associated Press count.