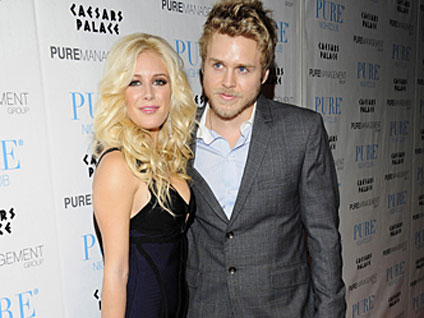 The reality TV personality cited irreconcilable differences as the reason for the split in the divorce petition filed in Santa Monica, Calif., Superior Court.

"Heidi has amended her petition for separation and today has filed a petition for dissolution of marriage from Spencer Pratt," Montag's lawyer Jodeane Farrell told Peple magazine on Friday. "The couple has agreed they would like their divorce to be finalized in a timely manner in an out of court settlement. Both parties are amicable with each other and over the possibility of finalizing their divorce."

Montag filed for legal separation from Pratt on June 8, a week after confirming she had moved out of the home the couple shared.

"I needed some alone time," she said. "There are so many lies out there about me and I just needed space - even away from my husband."

At the time, Montag's "The Hills" co-stars were skeptical about the breakup.

"I think it's a joke," Audrina Patridge told People magazine at the MTV Movie Awards in June. "I don't believe it. They're inseparable and in love."

Montag and Pratt married last April at a church in Pasadena, Calif.