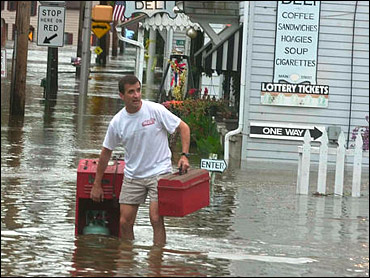 A foot or more of rain fell in parts of the Northeast, forcing hundreds from their homes, rupturing small dams and slowing Amtrak trains to a walk.

No injuries had been reported in the areas of New Jersey, Pennsylvania and Maryland hardest hit by the deluge, but at least one woman had a harrowing rescue.

Tammy Spiese was trying to clear debris on her property near Reading, Pa., when rising water carried her into a drainage pipe. She had to be pulled out by her husband and a police officer.

"I was in the water up to my neck," Spiese said. "It was very powerful and I had to hold onto the rocks above."

South-central New Jersey was hardest hit with at least five small dams rupturing during the night, said Kevin Tuno, the Burlington County emergency management coordinator. Many of the dams in the area hold small reservoirs in low-lying residential areas.

The heaviest rainfall in Burlington County was about 13 inches at Tabernacle, the National Weather Service said.

Parts of northeastern Maryland got up to 8 inches of rain that flooded streets and basements Monday, and some motorists had to be rescued when their cars stalled in deep water, officials said. Most of the water had subsided by Tuesday morning and major roads were reopened, said Harford County official Ernie Crist.

At least 15 Amtrak passenger trains were delayed Monday evening in Maryland, said spokesman Daniel Stessel. Water flowing over the tracks in many places forced north- and southbound trains to slow to just 2 mph, or walking speed, he said.

An estimated 6 inches of rain fell in eastern Pennsylvania's Berks County, where firefighters used a boat to rescue three people and a dog trapped in two homes by Manatawny Creek, which rose about 4 feet in minutes.

Water and mud rushed into a bowling alley Monday at Pottsville in eastern Pennsylvania after a sodden embankment behind the building collapsed, and custodian John Bova and his wife hurried to open doors to let the flood out. Then they shut off the electricity and fled, he said.

"The mountain just came down," Bova said. "We were lucky to get out."