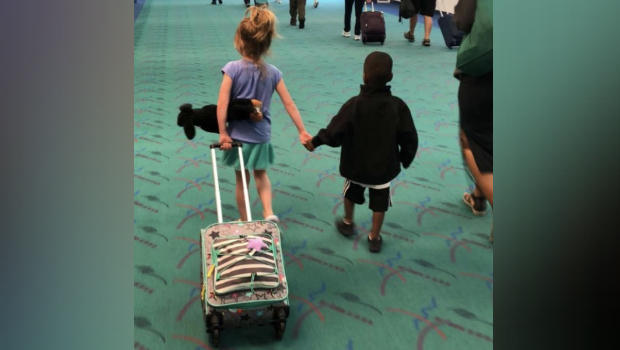 A photo of two kids who met on an airplane captured thousands of people's hearts last week. Now, the two kids in the viral photo have been reunited.

Kendell and Shauntay met on an Allegiant Airlines flight headed to Flint, Michigan, on May 6. The two hit it off on the short flight and by the time the plane landed, the new friends had become so close they held hands as they disembarked.

"It's kids being kids. When left to their own devices everybody is naturally nice," Shauntay's mother, Kenya Menzies-Peoples told CBS affiliate WNEM-TV.

A stranger on the flight took a heartwarming photo of the two pals and posted it on Facebook. "I flew home from St. Pete's last night, next to a wonderful woman from Saginaw. I would love for her to find this picture, but I never caught her name. The little boy in this photo is hers," a fellow passenger named Monica wrote.

"These two kids were total strangers and the little girl just scooped her little man's hand right into hers! This is our future." The passenger shared the photo on her Facebook page "Saginaw Love," which she created as a way to share feel-good stories from the town.

Shauntay's mom saw the photo online and shared it. The photo has been shared over a thousand times by people inspired by Kendell and Shauntay's message of friendship.

The kids' moms had their two tykes reunite for a play date about a week after the flight. Touched by their story, Allegiant Airlines gave both families $100 off their next flight and free parking.

"It just tells you we do need more good in the world. And this was a prime example and it just gives us hope," Nicole McCluskey, Kendall's mother, said.

"All the bad things and bad stories we hear, it's just nice to see something pure and innocent," Shauntay's mother said. Although they're just kids, Kendell and Shauntay are spreading a message of kindness and friendship across the country.