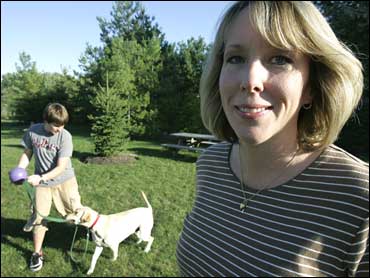 Beth Meter is a cardiac nurse who has seen plenty of heart attacks, so when her son complained of sudden crushing chest pain that spread to his arm, she was certain he was having one.

Doctors at first didn't believe her. That's because her son had just turned 13.

A report from Ohio doctors documenting nine cases over 11 years in kids as young as 12 says heart attacks in children are a rare but under-recognized problem.

For Beth's son, Dan, it took a month to see a specialist who confirmed the diagnosis. Luckily, 1½ years later, the Strongsville, Ohio, teen is on heart medicine but is doing well.

"Pediatricians need to understand that this is a true and real condition," Mrs. Meter said. "Don't just push aside any kid that's complaining of chest pain."

All but one of Lane's patients were boys. Doctors are uncertain whether girls face a lower risk because there's little in medical literature about this type of heart attack.

Lane called it "an under-appreciated phenomenon." His report appears in October's issue of the medical journal Pediatrics.

Chest pain is a common symptom in children, but 95 percent of the time, it's not heart-related and it is rarely life-threatening, said Dr. Reginald Washington, a Denver children's heart specialist.

Muscle strains and stress are among common causes of kids' chest pain. Most heart-related chest pain in kids is caused by infections, structural abnormalities or problems other than heart attacks, Washington said.

He said the Akron doctors' report "does a good job of telling physicians" they shouldn't dismiss heart attack as a possibility in children.

Dan Meter said the pain hit him during seventh grade social studies class in March 2006. A teacher noticed he looked pale, and Dan figured it was a stretched muscle. He didn't tell his mom at first.

"I didn't think that could happen to a kid," said Dan, now 14 and in ninth grade.

His mother took him to the doctor the next day, then to the hospital, where the pain returned and spread to his arm. Staffers there dismissed her concerns about a heart attack.

Dan was hospitalized for two days. Despite abnormal blood tests and imaging tests, he was told he likely had a heart infection and was sent home. His pediatrician ultimately sent him to see Lane.

Lane said parents should consult a doctor any time a child has sudden chest pain. A heart attack in children is typically a crushing-type pain that radiates to the arm, jaw or neck - similar to adults' symptoms, Lane said.

It is uncertain what causes spasm-related attacks, which don't involve the issues usually seen - narrowed arteries with plaque that bursts, leading to a clot that blocks blood flow.

Some overweight children have signs of early artery disease. But it takes years for that to lead to clot-related heart attacks, said Dr. Dianne Atkins, an American Heart Association spokeswoman and pediatrics professor at the University of Iowa.

Patients in the Pediatrics report were diagnosed through blood tests that showed abnormal levels of an enzyme made by injured or dying heart tissue. Many also had abnormal heart-imaging tests. Both methods are used to diagnose heart attacks in adults.

"In most cases we didn't see any permanent long-term injury in the heart function," and none of the patients has experienced any long-term problems, Lane said.

Although Dan takes heart medicine daily and nitroglycerin pills when occasional chest pain returns, he still snowboards, shoots hoops and does other hobbies he enjoyed before the attack.

Still, he has advice for other kids who experience sudden, spreading chest pain.

"Don't be afraid to tell someone because it's very serious," he said.