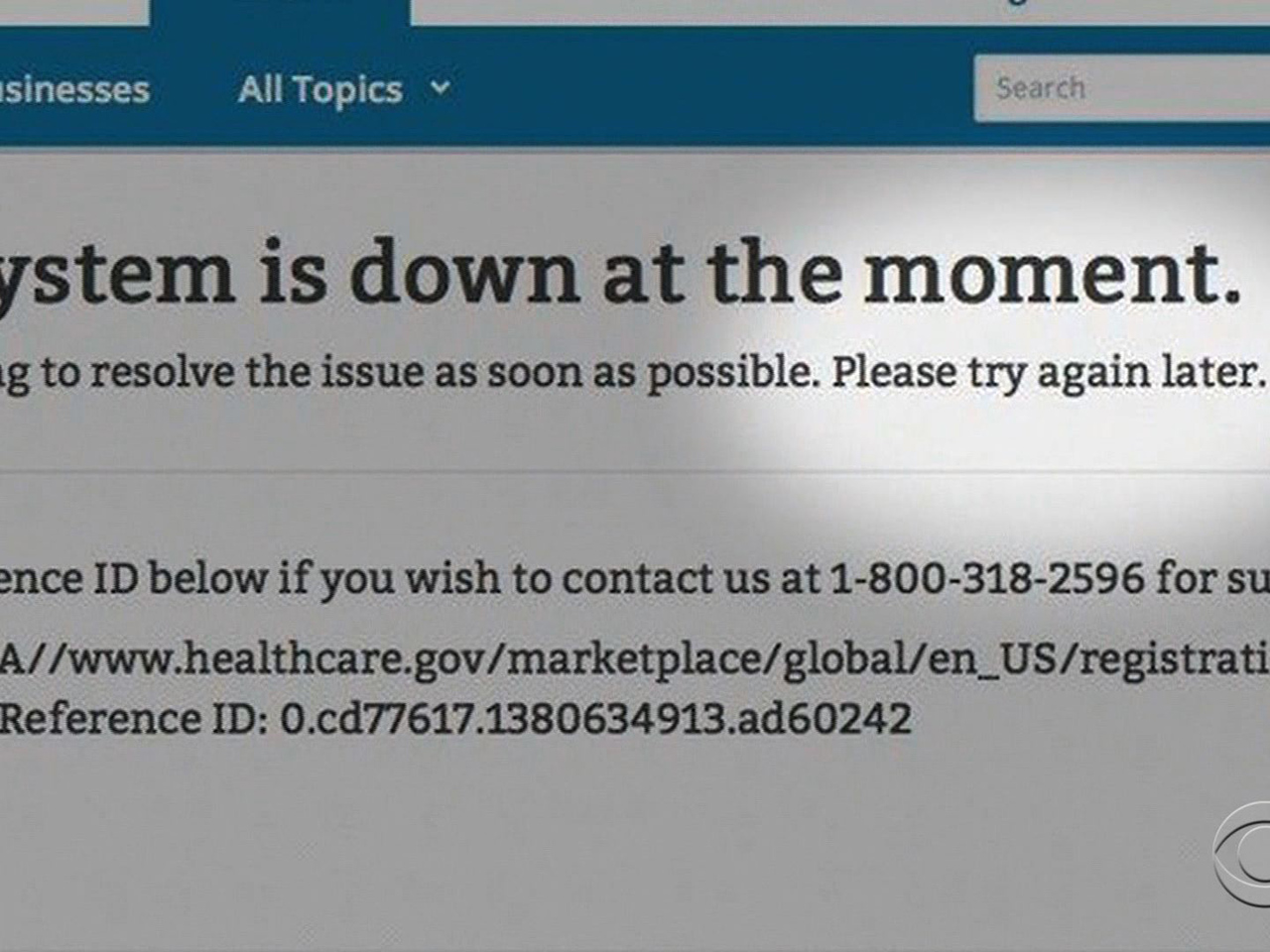 The long-awaited opening of Obamacare was accompanied today by the long-threatened closing of the federal government.

There were major problems all over the country. Websites were slow or crashed altogether, leaving a lot of folks angry and frustrated. The president noted that by 7 a.m., more than a million people had visited the main website: www.healthcare.gov.

"That gives you a sense of how important this is to millions of Americans around the country, and that's a good thing," President Obama said. "We're going to be speeding things up in the next few hours to handle all of this demand that exceeds anything that we had expected."

The millions of people flooding the system on healthcare.gov cause the website to briefly brake under the strain, causing it to go from "apply now" to "please wait" to "please try again later," reports CBS News correspondent Wyatt Andrews. (Watch Andrews' full report above.)

Several states running their own exchanges also had delays. In Washington state the website closed down.

Administration officials said the federal site was overwhelmed by 2.8 million visitors -- a number they never expected. White House senior adviser David Simas said the problems drew an all out response from website technicians at the Department of Heath and Human Services.

"We expected a slow ramp up and what we saw today was an overwhelming response that exceeded even what we've seen in Medicare in any given day," Simas said. "So it was a good start. We identified problems, tomorrow is going to be better."

Despite the delays and inconvenience, the White House argued the high numbers were a sign of intense interest in Obamacare. California alone saw 1.7 million hits on its website in the first hour; Connecticut reported 130,000; and Maryland had 87,000.

What the administration is not reporting is how many people enrolled on Tuesday. Some of that is because officials won't know until people sign a contract with an insurance company and make a down payment.

In more than half the states -- 27 in all -- the insurance exchanges are being run by the federal government because they declined to set up their own. Texas is one of those states, and folks there said they ran into trouble, reports CBS News correspondent Anna Werner. (Watch Werner's full report at left.)

"The idea of being able to compare multiple plans, with one simple application, if it works as advertised like that, it will help me a bunch," said Dallas resident Matt Warren.

Warren and his wife Jeannette have two kids. She's a nursing student. He's a freelance videographer. The family has to pay for their own insurance, costing nearly $5,000 dollars a year.

But Matt Warren himself is not covered because his high cholesterol and a case of skin cancer made the policy too expensive.

"If something were to happen to him, it would affect our whole family. It's terrifying for us," Jeannette Warren said.

Instead of new choices, the website told him to wait. Attempts to log on with a CBS News producer's iPad failed too.

After more than an hour, he gave up.

"I was excited to get on, and I can't, so yeah I'm disappointed," Matt Warren said.

Matt Warren said he will try again Wednesday. There are about six million uninsured residents in Texas. It's estimated half of them could be covered by the Affordable Care Act.

In 17 states, the health insurance exchanges are being run by the states themselves. New York is one of them.

Young Americans like Brooklyn resident Tory Noll are essential if Obamacare is to work, reports CBS News correspondent Don Dahler. (Watch Dahler's full report at left.) The administration says it needs 2.7 million young and healthy people to sign up to cover the cost of treating the sick.

"I'm not getting any younger and I would like to be protected in some way absolutely," Noll said.

The self-employed shoe designer has not had health insurance since college.

On Tuesday, she got as far as choosing a password.

"I suppose everyone is trying to do this now," Noll said as she started signing up.

Then the server crashed. New York's health exchange helpline assured callers it was a temporary glitch.

The state's Executive Director of Health Donna Frescatore said on Tuesday: "We have received over two million hits on our website starting right about at opening time at 8 o'clock this morning."

Things did not improve much by afternoon. Noll tried eight times before she gave up.

Noll said she'll try again Wednesday. Registrants have until December 15th to sign up for coverage starting the first of the year, and until March to sign up or risk tax penalties.

Those penalties start at $95. It's a fine, because for the most part under Obamacare, individuals are required by law to have insurance either through the on-line exchanges or their employers.