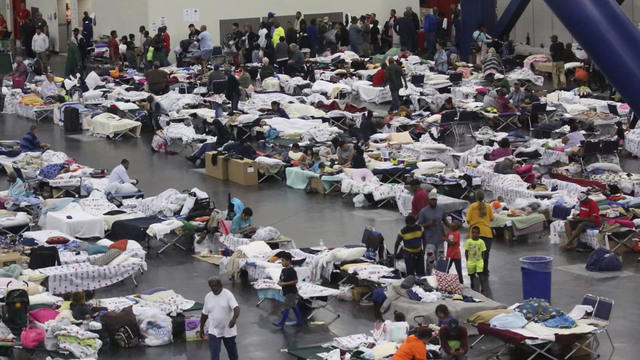 The devastating floodwaters in Texas are raising several major health concerns for residents in both the short and long term, in the wake of Hurricane Harvey.

"CBS This Morning" co-host Norah O'Donnell spoke with Dr. David Persse, physician director of Houston's EMS and Public Health Authority, about what Houston residents should watch out for in the coming days and how those in shelters can take precautions to avoid a health crisis.

While mosquitoes aren't currently a concern for Persse, they will be in a major one very soon.

Asked if they've had any Zika cases in the area, Persse said, "We've had people who've been here who've been infected with Zika in Central and Latin America but we've not had any local transmission here. But that is absolutely something that is front and center on our radar."

With more than 17,000 people in shelters and about 8,000 crammed into a convention center that has an official capacity of just 5,000, O'Donnell asked Persse, "How do you avoid a health crisis?"

"When we have lots of people congregated into small spaces like this, you worry about viral illness outbreaks that would cause gastrointestinal problems," Persse said. He said the worries are much like the concerns on cruise ships, where viruses like the norovirus can run rampant. It could become a "real problem in a convention center where people are already got all kinds of problems going on."

In order to prevent an outbreak like that, Persse said personal hygiene and access to hand sanitizer are key.

"You have to really try to get folks to focus on their own personal hygiene. So the facility has to make sure the bathrooms are kept tidy, which means they need to be cleaned multiple times a day," he said. "Also, we try to get the hand sanitizer throughout the facility so people will have it easily accessible to them. The one place you don't have hand sanitizer is in the bathroom because you want people to use soap and water to wash their hands."

O'Donnell spent time inside the convention center Tuesday speaking to evacuees and said, "Getting the hand sanitizer up and distributed has been one of our challenges. We need so much of it. The facility had some to begin with but this is a crowd that is much larger than the facility is used to dealing with."