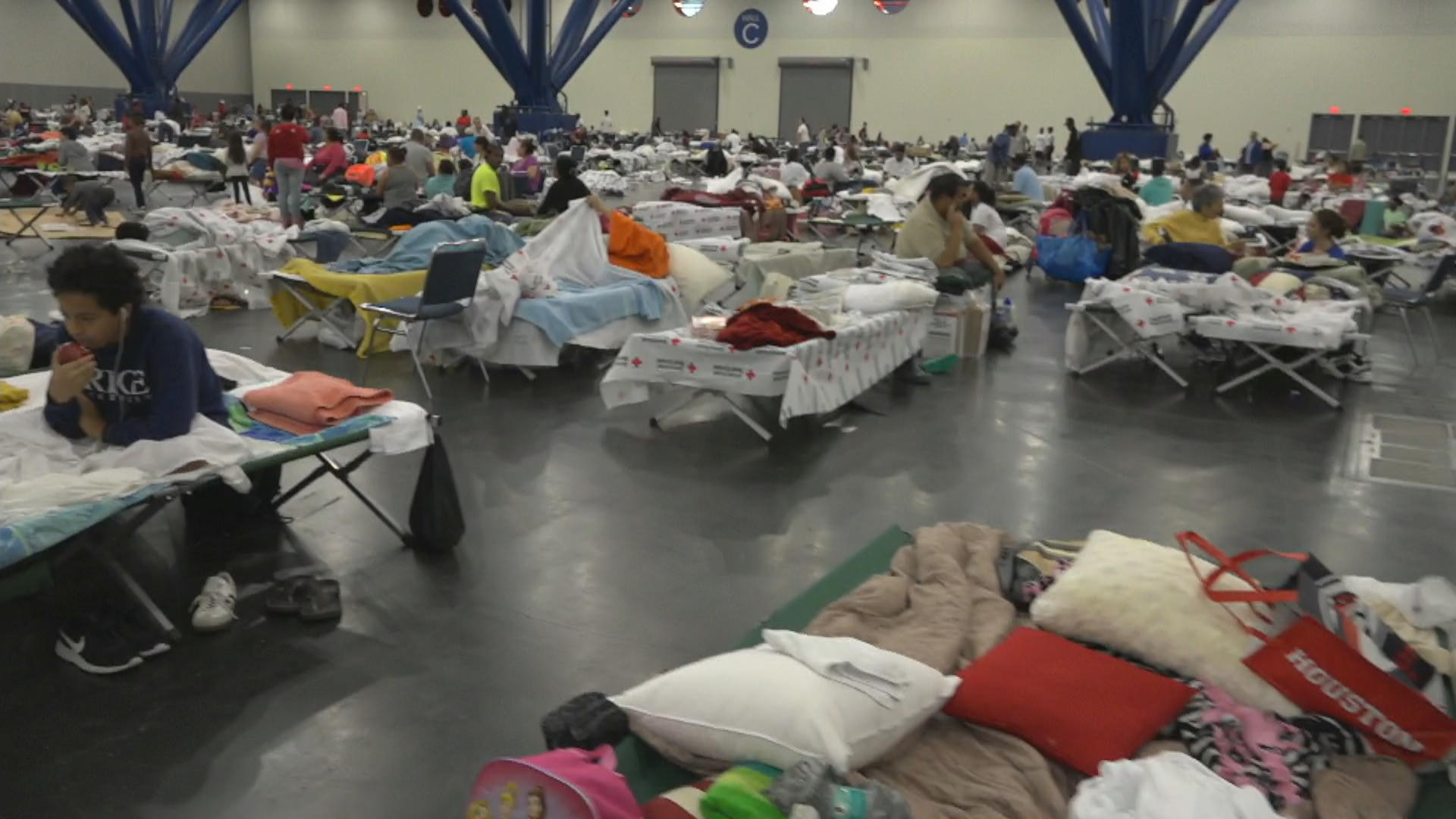 About 8,300 people spent the night at the George R. Brown Convention Center Tuesday -- about a thousand fewer people than the day before. The Red Cross told CBS News Wednesday morning that everyone inside the convention center now has a cot and people can also take showers.

On Tuesday, "CBS This Morning" co-host Norah O'Donnell spoke to a woman about the conditions inside. She went back later in the day to see the situation herself.

Lavan's frustration has only grown since a dump truck brought her family to the convention center.

Stacks of secondhand shoes and mountains of donated clothing are available to those who arrive. But beds? All were taken by the time Lavan arrived. She showed CBS News her accommodations.

Volunteers gave sticker books to her children while the family hangs in limbo, waiting to find out what happens next.

Asked what her family has been doing all day, Lavan said, "This. Nothing for 'em to do." Lavan said the bathrooms are "horrible."

Shaniqua Cooper, a mother of six, said there were no cots for her family either.

"I stayed up in a chair. I didn't sleep. But my babies slept on the floor," Cooper said.

People came to the shelter with no clothing, not even shoes. The call went out for donations, and it resulted in mountains of clothes.

"I went to the table, they gave us two little things for them apiece, and they told us when they wear those to come back. And they gave them some Pampers and wipes, they did. They gave us that," Cooper said.

Cooper thinks the city should have been more prepared.

"When the mayor said 'don't leave,' he didn't think it was gonna be that bad, I'm like, okay. So. But after that, when it started coming in, I just knew it was a lie. I never been through nothing like that," Cooper said.

Charles Maltbie is with the American Red Cross, which, as a partner of FEMA, is responsible for running shelters like this.

O'Donnell asked, "Houston's a big city, fourth largest in America, as you know. The plan was only to fit 5,000 people. How could that be?"

"That is a good question. That's something that, what we really look to do, is have smaller shelters available. We try and house folks as close to their homes as possible and this really was more of an evacuation site," Maltbie said. "The assumptions that were in place, even a week ago when we were setting this up, have just been completely overwhelmed."

He said things are going "as well as it can be with the conditions."

"We're meeting the immediate emergency needs of all the clients, and we're just keeping up," Maltbie said.

"They're saying no one expected the storm to be this bad," O'Donnell told Lavan. To which Lavan said, "They expected it. They knew. We have weathermen and women for a reason. They knew this was gonna happen. They knew this."

Forecasters did predict rainfall of up to two-and-a-half feet in some spots, but not the historic amounts we've seen so far. Red Cross organizers say they hope even more supplies will arrive at the shelter today.