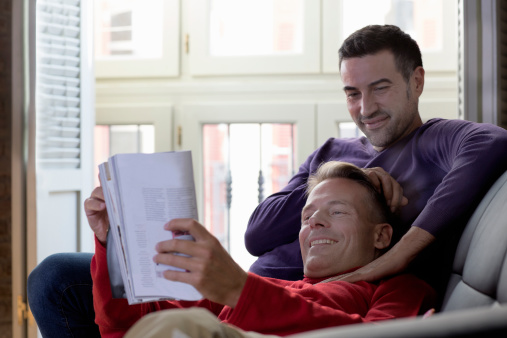 Lesbian, gay, and bisexual people may be more likely to smoke, drink excessively, and experience serious psychological distress, compared with heterosexual people, but in some other health-related areas they fare better, according to a new report from the Centers for Disease Control and Prevention.

The report marks the first time that the CDC has looked at health disparities among lesbian, gay, and bisexual populations on a national level. CDC researchers recently added an option for people participating in the agency's National Health Interview Survey to indicate their sexual orientation.

The researchers found that a higher percentage of gay or lesbian (35.1 percent) and bisexual people (41.5 percent) said they had five or more drinks on one day at least once in the past year, compared with those who identified themselves as straight (26 percent). Similarly, a higher percentage of gay, lesbian and bisexual people reported being smokers, compared with straight participants. [5 Myths About Gay People Debunked]

A higher percentage of bisexual people (11 percent) experienced serious psychological distress in the past 30 days, compared with their counterparts who identified as straight (3.9 percent), according to the report released today (July 15) by the CDC.

The researchers didn't find differences in people's levels of physical activity, or the percentage of all people reporting that they were in excellent or good health, based on sexual orientation. However, among women, a higher percentage of straight women (63.3 percent) said they were in excellent or very good health, compared with lesbians (54 percent).

The CDC researchers cautioned that although the report is based on a relatively large, and nationally representative group of people, the number of participants who identified as gay or lesbian or bisexual is still relatively small, and some of the estimates may not be reliable.

Although differences in people's health based on their race and ethnicity, sex, and income level are well-documented, less is known about how sexual orientation may be linked with health. Several states added sexual orientation questions to their health surveys beginning in early 2000s, even though they faced a lot of resistance, said Julia Dilley, an epidemiologist at Oregon Health Authority, Public Health Division.

"People were afraid of political backlash. They were also concerned that people wouldn't accurately report their sexual orientation," Dilley said.

Now, the inclusion of sexual orientation in the national health interview survey will enable researchers to find and better address problems among different populations. Sexual orientation can be important information, particularly in some areas of health such as smoking, where sexual minorities are at higher risk, independent of their other characteristics such as race or economic status.

"It does seems like sexual orientation has an independent influence on disparities, and adds on top of any disparity that the person is experiencing," Dilley told Live Science.

The findings of the new national report are in line with the findings of previous state-level studies, said Dilley, who wasn't involved with the new report. Researchers have found differences between sexual minorities and straight people when it comes to access and use of health care. In the new report, for example, a lower percentage of lesbian or bisexual women said they had a usual place to go for medical care, compared with straight women. In contrast, straight people were more likely than gay or bisexual people to report they didn't seek medical attention because of the cost.

It is difficult to pinpoint what's driving the differences in health behaviors such as smoking and alcohol consumption, as well as healthcare access and psychological well-being among homosexuals and the general population, but social stressors and barriers to access to healthcare could be among the underlying reasons, said Kari Greene, another researcher with Oregon Health Authority.