President Obama has set a year-end deadline for passing comprehensive health care reform, and on a number of occasions he has said the nation is "closer than ever before" to making it happen.

As Congress methodically -- and sometimes clumsily-- cobbles together a health care bill, CBSNews.com will track its progress for you. Below is a chart to track the six major steps Washington needs to take to accomplish health care reform. Last week, the Senate finally cleared step one -- and saw renewed opposition to some specific parts of their plans from formidable groups like health insurers and labor unions.

This week, leaders in the House and the Senate continue with backroom deal-making to bring unified bills to the floor in their respective chambers.

More on the progress of health care legislation in each chamber of Congress. 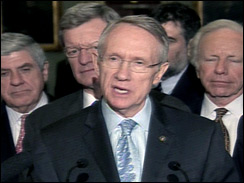 (CBS)
SENATE: Two committees in the Senate have jurisdiction over health care reform, and as of last week, both have approved their own bills. Now, Senate leadership must move onto step two and present a bill before the full Senate.

It remains to be seen what components of the two different bills will survive: For instance, one bill has a government health insurance plan, or "public option," while the other does not. Only one bill taxes costly employer-provided health plans in order to help pay for reform.

The insurance industry put out a scathing report about the Baucus bill last week, but the legislation still made it out of the committee. After the bill was approved, a large group of labor unions took its turn blasting the bill for taxing costly insurance plans -- a move the unions called "a new tax on the middle class." Labor unions and other liberal groups are pushing Senate leaders to bring a bill to the floor that more closely resembles the relatively liberal HELP bill.

Baucus said Thursday that the bill that reaches the Senate floor will ultimately gain 60 Democratic votes and at least one Republican vote. Technically, Democrats do not need 60 senators to vote for the bill -- they only need 60 senators to promise to not join Republicans in a filibuster. Moreover, as of Thursday, Democrats are free to bypass filibusters and approve health care legislation with only 51 votes through a complex process called reconciliation, though they say they do not want to go that route.

Meanwhile, in an attempt to keep the health care bill budget-neutral, the Senate last week wrote a separate bill for one proposal that would have added hundreds of billions to health care reform. The Senate is hoping to quickly pass a $247 billion fix to Medicare reimbursement rates for physicians. The bill would avert a scheduled reduction in fees paid to doctors. However, as it's currently written, Congress has no way to pay for it, so it will add to the deficit.

5209744HOUSE: The House of Representatives has completed step one: Three different committees with jurisdiction over health care have passed different variations of health care reform legislation. Now, it is up to House leaders to decide how to merge the three.

House Speaker Nancy Pelosi (D-Calif.) has insisted the House bill will include a public option, and last week the Congressional Budget Office provided the House with cost estimates for two variations of the public option. The CBO reported that a moderate version of the plan, paired with expanded Medicaid eligibility, would cost the least of the two plans under consideration.

House Majority Leader Steny Hoyer (D-Md.) said Thursday that the House is not likely to vote on health care legislation until mid-November. He also reportedly said he could not guarantee the House would meet its goal of voting before Christmas.