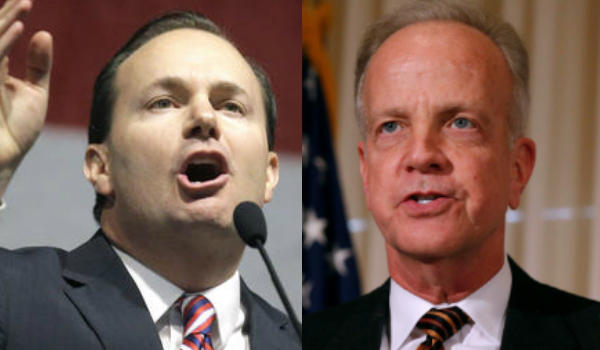 Two more Republican senators announced late Monday that they oppose the second version of their own party's proposal to repeal and replace Obamacare, effectively dooming the legislation in its current form.

Sens. Mike Lee, R-Utah, and Jerry Moran, R-Kansas, announced their opposition to the revamped Better Care Reconciliation Act (BCRA) plan in statements and on social media. Lee argued that the bill doesn't get rid of Obamacare's taxes and regulations.

"In addition to not repealing all of the Obamacare taxes, it doesn't go far enough in lowering premiums for middle class families; nor does it create enough free space from the most costly Obamacare regulations," said Lee, who also opposed the original measure.

Lee said on Twitter that he and Moran would vote against a motion to proceed to the bill, which opens debate and the amendment process.

Similarly, Moran said in a separate statement that he's still in favor of repealing and replacing the 2010 health care law, but that the revised text is "bad policy" because it doesn't deliver a full repeal or address rising health care costs.

Late Monday evening, President Trump took to Twitter with his reaction, writing: "Republicans should just REPEAL failing ObamaCare now & work on a new Healthcare Plan that will start from a clean slate. Dems will join in!"

Senate Majority Leader Mitch McConnell released a statement Monday evening to say that a two-year delay in implementing an Obamacare repeal would provide a "stable transition period" to a new health care program.

McConnell is planning to put his own members on the spot and said that given the collapse of the Senate bill, the Senate will simply vote (date: TBA) on the House-passed bill, CBS News' Nancy Cordes reports. The first amendment to the bill will essentially swap out the House bill for a bill that passed the Senate two years ago, repealing Obamacare and setting a two year timetable to come up with a replacement. President Obama vetoed that bill.

"So, in the coming days, the Senate will vote to take up the House bill with the first amendment in order being what a majority of the Senate has already supported in 2015 and that was vetoed by then-President Obama: a repeal of Obamacare with a two-year delay to provide for a stable transition period to a patient-centered health care system that gives Americans access to quality, affordable care," McConnell wrote in his statement.

This comes after Senate Majority Leader Mitch McConnell, R-Kentucky, announced Saturday that he would delay a vote this week on the revised health care bill. Sen. John McCain, R-Arizona, will be absent as he recovers from surgery to remove a blood clot above his left eye.

Also late Monday, McCain issued a statement from Arizona saying that "Congress must now return to regular order, holding hearings, receive input from members of both parties" to prevent repeating "the original mistakes that led to Obamacare's failures."

"One of the major problems with Obamacare was that it was written on a strict party-line basis and driven through Congress without a single Republican vote," McCain wrote.

He also points out that Congress should "heed the recommendations of our nation's governors so that we can produce a bill that finally provides Americans with access to quality and affordable health care."