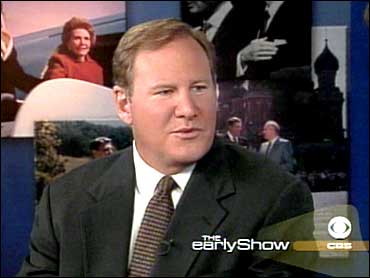 Tim McCarthy is one of America's unsung heroes. He was a member of President Reagan's Secret Service detail on March 30, 1981, the day John Hinckley Jr. fired six bullets from a .22 caliber gun. One of the shots hit the president. But McCarthy prevented further damage by leaping in front of Mr. Reagan and taking a bullet for him.

"It was, hopefully, going to be a routine movement day, as we called it, to the Washington Hilton Hotel," McCarthy told The Early Show co-anchor Rene Syler. "The advance work had been done by Special Agent Bill Green. He spent a week on it, setting up the security.

"We arrived at the Hilton Hotel. The president gave a speech to (the Construction Trades Council). We left and were leaving the hotel, walking in a formation around the president, as is the standard protocol, when we just about got to the armored car, and as you recall, President Reagan had only been president for 60 days. There was no information that he would work a rope line or anything like that. So we were prepared to go to the car.

"Just before the president got to the car, John Hinckley pushed himself forward and fired six rounds in about one and a half seconds."

McCarthy replied: "That's exactly right. If you saw the big picture out there, a lot of people – police officers, military -- were ducking and looking for cover. That's the training that they received. They did exactly what they should have done.

"In the Secret Service," he continued, "we're trained to cover and evacuate the president. And to cover the president, you have to get as large as you can, rather than hitting the deck. So I have to say people have asked me, and I said quite frankly, it probably had little to do with bravery and an awful lot to do with the reaction based upon the training. It was a heck of a team effort out there that day. It was people like Ray Shaddock and Jerry Parr, pushing the president into the car, other agents going to John Hinckley and helping subdue him, to help save the life of the president that day."

Up until then, McCarthy had not had much personal interaction with President Reagan. But the president certainly knew who he was after March 30, 1981. They had surgery and were recovering in the same hospital, but McCarthy was able to go home before Mr. Reagan.

The day he was leaving the hospital with his wife and a couple of his children, the family got word that the president would like to see them. Mrs. Reagan also was there.

"We had a nice visit," McCarthy recalled. "The president was commenting about he was going to miss springtime in Washington, the Cherry Blossom Festival. We had a real nice conversation. My kids were young, 2 and 4, getting restless. They didn't understand the significance of any of this. I was just about to walk out the door. We'd said our goodbyes. I was right at the door.

"He said, 'Tim, hold on a minute. Wait a minute. Listen. It was McCarthy, Reagan, (Washington police officer Tom) Delehanty, (White House press officer Jim) Brady. What the hell did this guy have against the Irish?' You have to wonder if the leader of the free world could already maintain a perspective on this, as serious and critical as it was, he certainly had gotten over it already, and it was a great example for me to get beyond this and move on."

On June 10, 2004, the day before Mr. Reagan's funeral, McCarthy had the opportunity to visit Mrs. Reagan.

"She looked great, under a great deal of stress, as you can imagine," said McCarthy, though he declined to give details about their private conversation.

"There are two victims to Alzheimer's, I believe. It's not just the patient, but also the caregiver. For a lot of years now, she's certainly been a great example to all of us."