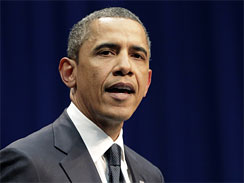 HONOLULU - Democratic Gov. Neil Abercrombie will end his quest to prove President Barack Obama was born in Hawaii because it's against state law to release private documents, his office said Friday.

"There is nothing more that Gov. Abercrombie can do within the law to produce a document," said Dela Cruz. "Unfortunately, there are conspirators who will continue to question the citizenship of our president."

Abercrombie, who was a friend of Obama's parents and knew him as a child, launched an effort last month to find a way to dispel conspiracy theories that the president was born elsewhere. The governor said at the time he was bothered by people who questioned Obama's birthplace for political reasons.

But Abercrombie's investigation reached a dead end when Louie told him the law restricted his options.

Hawaii's privacy laws have long barred the release of a certified birth certificate to anyone who doesn't have a tangible interest.

So-called "birthers" claim Obama is ineligible to be president because they say there's no proof he was born in the United States, with many of the skeptics questioning whether he was actually born in Kenya, his father's home country.

Hawaii's health director said in 2008 and 2009 that she had seen and verified Obama's original vital records, and birth notices in two Honolulu newspapers were published within days of Obama's birth at Kapiolani Maternity and Gynecological Hospital in Honolulu.

That information, called index data, shows a listing for "Obama II, Barack Hussein, Male," according to the department's website. The president was born Aug. 4, 1961.

"The index is just to say who has their records within the department. That's an indication," Okubo said. "I can't talk about anyone's records."

The Obama campaign issued a certificate of live birth in 2008, an official document from the state showing the president's birth date, city and name, along with his parents' names and races.