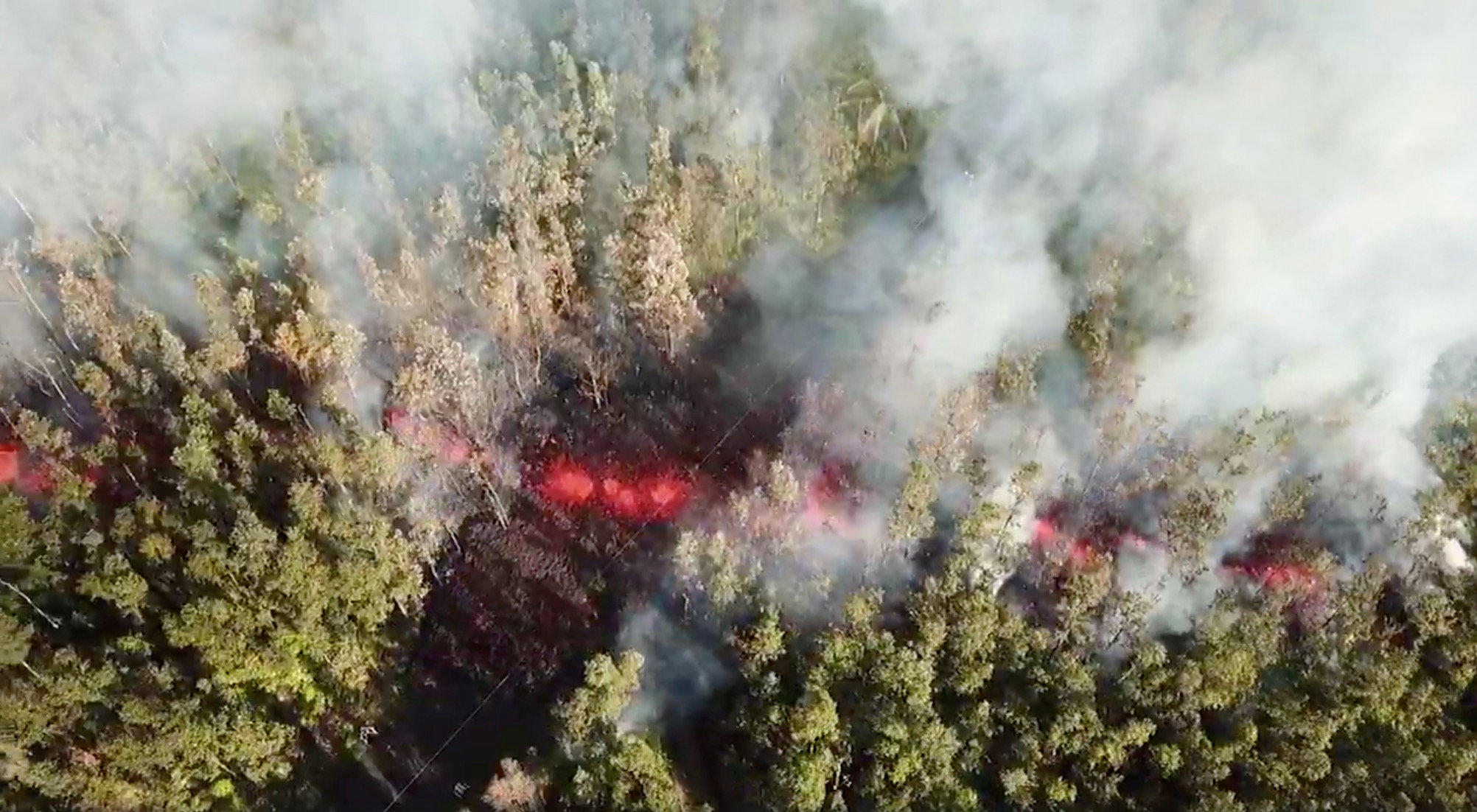 PAHOA, Hawaii -- Hawaii's Kilauea volcano sent more lava into Hawaii communities Friday, a day after forcing more than 1,500 people to flee from their mountainside homes, and authorities detected high levels of sulfur gas that could threaten the elderly and people with breathing problems. There were no immediate reports of injuries, but at least two homes were damaged by the eruptions.

After a week of earthquakes and warnings, the eruption that began Thursday threw lava into the sky from a crack in a road and sent another line of molten rock snaking through a forest. The activity continued Friday, with reports of lava spurting from volcanic vents on two streets. Areas downhill from the vents were at risk of being covered up.

The community of Leilani Estates near the town of Pahoa on the Big Island appeared to be in the greatest danger. Authorities also ordered an evacuation of Lanipuna Gardens, a smaller, more rural subdivision directly to the east. But scientists said new vents could form, and it was impossible to know where.

Civil defense officials cautioned the public about high levels of sulfur dioxide near the volcano and urged vulnerable people to leave immediately. Exposure to the gas can cause irritation or burns, sore throats, runny noses, burning eyes and coughing.

Volcano expert Paul Davis said the gas occurs during the melting process. "It's sort of like you've injected ammonia into all your nose, into your breathing area, into your throat," Davis told CBS News.

Maija Stenback began to get nervous when she noticed cracks in the streets near her home. On Thursday, she shot video of the lava as it bubbled and splattered across a street about six blocks from her house.

"You can feel it all the way into the core of your being," she said. "It's just that roaring and unbelievable power of the lava bubbling up and spitting up into the air."

Stenback, her daughter and grandchildren packed as much as they could into their car. The two kids were each allowed to select three toys to take before the family left for a friend's home about a 30-minute drive away.

"I have lived through a lot of lava flows here, but never this close before," Stenback said.

There were no immediate reports of injuries, but at least 100 people were staying in shelters Friday, with many more evacuees believed to be with relatives and friends.

Gov. David Ige declared a state of emergency, activating the National Guard to help with evacuations and provide security to about 770 structures in Leilani Estates and 130 lots in Lanipuna Gardens left empty when residents sought shelter.

"My family is safe, the rest of the stuff can be replaced," one resident told KGMB-TV. "When I bought here 14 years, I knew that this day would eventually come. But the reality is sinking in now."

Kilauea has erupted periodically for decades, and scientists said they have no way of predicting how long the eruption will continue.

A key factor will be whether a magma reservoir at the summit starts to drain in response to the eruption, which has not happened yet, said Asta Miklius, a geophysicist with the U.S. Geological Survey's Hawaiian Volcano Observatory.

"There is quite a bit of magma in the system. . It won't be just an hours-long eruption probably, but how long it will last will depend on whether the summit magma reservoir gets involved. And so we are watching that very, very closely," Miklius said.

County, state and federal officials had been warning residents all week that they should be prepared to evacuate because an eruption would give little warning.

The geological survey on Thursday raised the volcano's alert level to warning status, the highest possible, meaning a hazardous eruption was imminent, underway or expected.

Resident Ikaika Marzo said he witnessed large fountains of lava in the community that appeared to be 100 feet high.

"When we drove on that road, we heard a noise in the forest and it was like a little thump," Marzo told KGMB-TV. "Next thing, like three-to-five seconds after that, we smelled sulfur. After that, that's when there was tons of sulfur. Then we saw some lava popping out."

Henry Calio said the first sign that something might be wrong happened when cracks emerged in the driveway of his home in Leilani Estates. His wife, Stella, then received a call from an official who told them to get out immediately.

The two feared they might lose their house. "This is our retirement dream," Henry Calio said.

Kilauea's Puu Oo crater floor began to collapse Monday, triggering the earthquakes and pushing the lava into new underground chambers. The collapse caused magma to push more than 10 miles downslope toward the populated southeast coastline of the island.

The magma later crossed under Highway 130, which leads to a popular volcano access point. Civil defense authorities closed the area to visitors and ordered private tour companies to stop taking people into the region.

Over the decades, most of Kilauea's activity has been nonexplosive, but a 1924 eruption spewed ash and 10-ton rocks into the sky and killed one person.

A 1983 eruption resulted in lava fountains soaring over 1,500 feet into the sky. Since then, the lava flow has buried dozens of square miles of land and destroyed many homes.